Can making locals legally responsible for the forests they steward help them adapt?

The Congolese and Gabonese governments are introducing finance laws that protect forests and incentivize communities to use land sustainably.

C ountries home to the Congo Basin rainforest, including Gabon and the Republic of Congo, are working on ways to harness their majestic trees to benefit their people while maintaining climate protection and other natural services the forests provide.

This week, the Republic of Congo – also known as Congo-Brazzaville – officially published a new law, approved by the president in July, to ensure more sustainable management of the country’s vast forests.

Gabon, meanwhile, hopes to have a new forest law in place by next summer, marrying efforts to safeguard the climate and biodiversity with creating jobs in forestry, said Lee White, its minister for forests, water, environment and climate change.

Former conservationist White said he had been shocked, on taking up his ministerial role last year, at the “very low value we attribute to tropical timber”.

Foresters in Gabon do not make much money – a key reason why some are tempted to turn to illegal practices, he added. 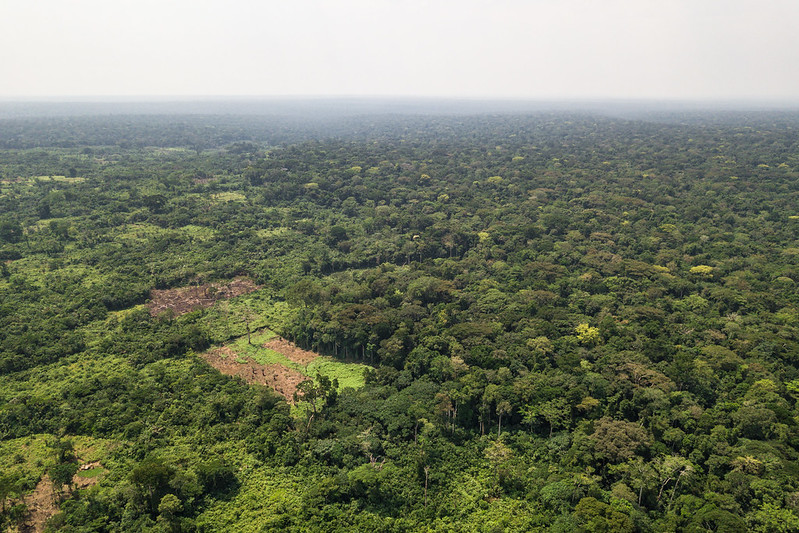 The density of carbon stored in Gabon’s trees is among the world’s highest. Photo by Axel Fassio/CIFOR.

“Unless we can make timber into a precious resource, we’re not going to be able to maintain these Congo Basin forests,” he told the Thomson Reuters Foundation from Libreville.

White’s ministry plans to expand the country’s special economic zones, in which the government holds a stake of about 40%, where sustainably logged timber is processed into products ranging from furniture to parquet flooring and charcoal.

The aim is to add economic value and jobs, boost profits and reduce the amount of wood wasted.

White said Gabon’s ban on exporting raw logs, introduced a decade ago, had helped quadruple the size of its forest economy and double the number of employees in the sector – but far more could be done to make the most of the rich resource.

If forestry’s contribution to national income can grow to 40%, up from about 4% today, it would offer hope for “a long-term viable economy”, given Gabon still depends heavily on oil, White noted.

“Forest is a renewable resource and oil revenues are going to crash over the next 20 years as the world stops using oil,” he said.

“The challenge is how do we make beautiful tropical timber into something that is a valuable commodity for the Gabonese people, such that it’s better to keep the forests standing than turn them into oil palm plantations, soya bean or sugar cane?”

In Gabon, where just over a fifth of land is protected, companies with logging concessions are not permitted to fell trees with a diameter of more than 2 metres and must leave at least 10% of a cut area standing so it can regenerate.

The aim is to maintain the natural services of the forest ecosystem, which include carbon absorption and storage, wildlife habitats and rainfall production, White said.

A scientific study published in July found the density of carbon stored in Gabon’s trees is among the world’s highest, with 50% of the forest carbon locked up in just the largest 5% of its trees. 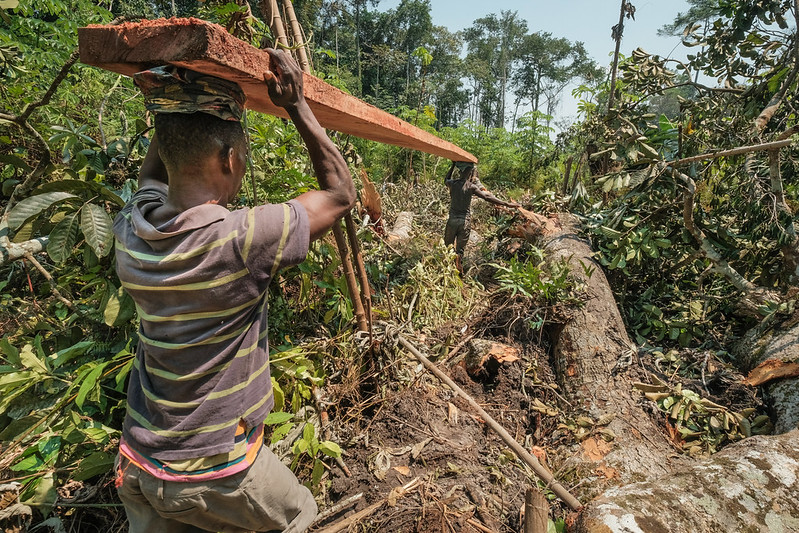 New laws are helping to turn tropical timber into a valuable commodity. Photo by Axel Fassio/CIFOR

Simon Lewis, a British author and academic who specialises in the Congo Basin, said both Gabon and the Republic of Congo still have very high levels of forest cover and low rates of deforestation.

Forests cover 88% of Gabon’s territory and 65% of Congo’s, while the annual deforestation rate in both countries is below 0.1%, according to the Central African Forest Initiative (CAFI).

Lewis said that – coupled with small populations – made them ideal locations to test approaches that preserve rainforests for the good of the planet.

“There need to be financial mechanisms that keep forest systems intact in places like Republic of Congo,” he added.

Through CAFI, which brings Central African forest countries together with donor governments, Gabon last year signed a 10-year deal worth $150 million that would let it earn cash by reducing emissions from deforestation and degradation, as well as soaking up carbon dioxide in its natural forests.

Congo also signed a letter of intent that would give it $65 million in return for committing to protect its peatlands and limiting annual conversion of forests to 20,000 hectares.

Lewis said a range of financial tools would be needed to successfully protect forests, including compensating communities for sustainable use of their lands.
The new Congo law is a step in that direction, he added.

The revised forest code bans the export of most logs and obliges companies with timber concessions to have an approved management plan for the land that includes conservation.

It also mandates the creation of community forests, and gives indigenous and local people a formal say in how forests are used.

Inès Mvoukani, a senior associate in Congo for environmental law charity ClientEarth and someone who worked on the new code, said it would serve as a tool to strengthen the rights of communities who are the forests’ “most effective guardians”.

The next step is to ensure the code is put into practice properly with full participation of local people, she added.

The legal organisations already support communities to negotiate agreements with companies licensed to exploit their land so the benefits are shared. The companies can pay into local development funds, build a health centre or school, or provide jobs and training.

Human rights groups and the government now need to help forest people build their legal and political knowledge and skills, Mvoukani said from Brazzaville.
“It’s up to us to reinforce the capacities of communities so that they are able to defend their rights in the sustainable management of the forests,” she added.