Building embankments on the side of rivers has saved people millions of dollars in flood damages. To reach their potential against rising waters we need to turn to nature and combine levees with green solutions.

T he 2019 flooding of the Mississippi, Missouri and Arkansas Rivers in the United States impacted 19 states and caused $20 billion in losses. Waters in Baton Rouge, Louisiana stayed above flood levels for 211 days, longer than any flood in its recorded history. The long-lasting flood kept farmers from harvesting food, put construction projects on hold, and halted barge traffic on the Mississippi River from March through June, leaving approximately 6.3 million tons of grains (worth almost $1 billion) unshipped.

Flooding continues to be a major risk in the Mississippi Basin given the growing intensity and frequency of rainfall in the region due to climate change. New analysis from Aqueduct Floods finds that by 2030, riverine flood risk in the Mississippi is expected to threaten $4.2 billion in GDP annually — an $831 million increase from 2010. 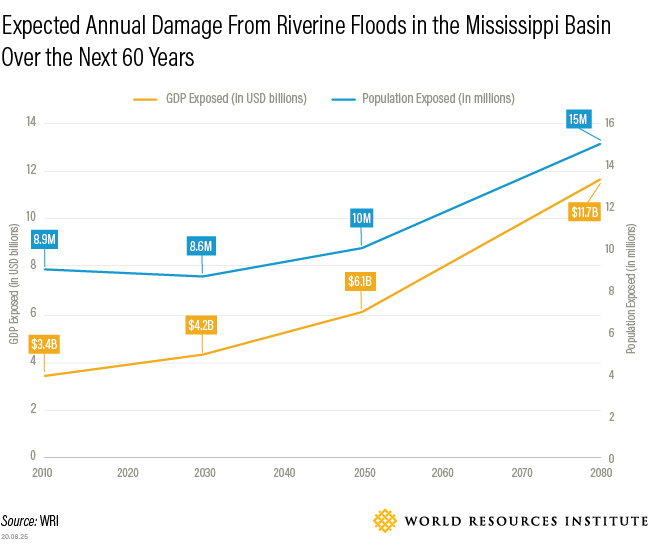 The situation is even more worrisome globally. By 2030, riverine flood risk is expected to threaten $1.1 trillion in GDP annually, a $790 billion increase from 2010.

Of course, flooding does not happen in isolation. Mississippi farmers were already struggling with financial repercussions from the U.S.-China trade war when the 2019 floods hit. By the end of 2019, farm bankruptcies were up 13% in the Midwest compared to 2018. Farm bankruptcies in the Midwest are predicted to increase by 42% this year, thanks in large part to the COVID-19 pandemic. As the nation prepares its economic response, hard-hit farm businesses will need special attention.

Federal investment in flood protection can provide the Mississippi Basin with long-term economic relief by protecting farmland and increasing resilience to future floods — but only if those investments include nature-based solutions alongside traditional solutions like levees.

Levees are the backbone of flood protection in the Mississippi River Basin. While they have helped prevent billions in damages, they also increase flood risk.

Levees changed the Mississippi River by increasing river level and speed. Flooding has worsened as a result. For example, the magnitude of a 100-year flood (a flood with a 1% probability of occurring in a given year) in the region increased 20% over the past 500 years, largely due to river engineering.

Levees also create an illusion of protection that incentivizes development and agricultural activity on flood-prone land. This has not only increased the cost of flood damages over time by putting more people, crops and property in harm’s way, but has also resulted in the loss of 85-90% of the Upper Mississippi River’s native wetlands. Wetlands serve as natural storage containers for flood water. A study in Illinois found that losing 1% of wetland cover can increase total flood volume by as much as 7%.

As the rate and intensity of flooding increases, maintaining levees is becoming unfeasible. In 2017, the American Society of Civil Engineers gave the U.S. levee system a “D” grade and estimated it would cost $80 billion to bring the system up to national standards. Out of 57 National Flood Insurance Program evaluations performed on Mississippi River and Tributaries Project levees in 2010, 38 returned negative reports, meaning they did not provide reasonable assurance that the levees could protect against a 100 year flood (a flood with a 1% annual probability of occurrence).

Levee setbacks are an optimal and cost-effective first step. They consist of relocating a levee farther away from the river. This option retains the added protection of the levee, while creating space for nature-based solutions that increase the resilience and effectiveness of flood mitigation, such as:

For example, after devastating floods in its Puyallup Basin in 2009, Washington state, in partnership with The Nature Conservancy, implemented an extensive levee setback and floodplain restoration project that included conservation easements on farmlands. Fewer than 5 years later, 2009-level rainfall hit the basin yet again — only this time, the system could absorb the water and prevent flooding, allowing farmers to operate as normal.

These recommendations are just the tip of the iceberg. WRI, in partnership with the World Bank, released a comprehensive guide to nature-based solutions, including detailed examination of their benefits and limitations. Engineers and environmentalists alike have been continually advocating for these solutions, particularly in the wake of major floods, such as in 1993 and 2019. What’s needed now is support from federal and state governments. Increased funding and targeted policies can make it possible to scale these efforts for the benefit of the environment and farmers. 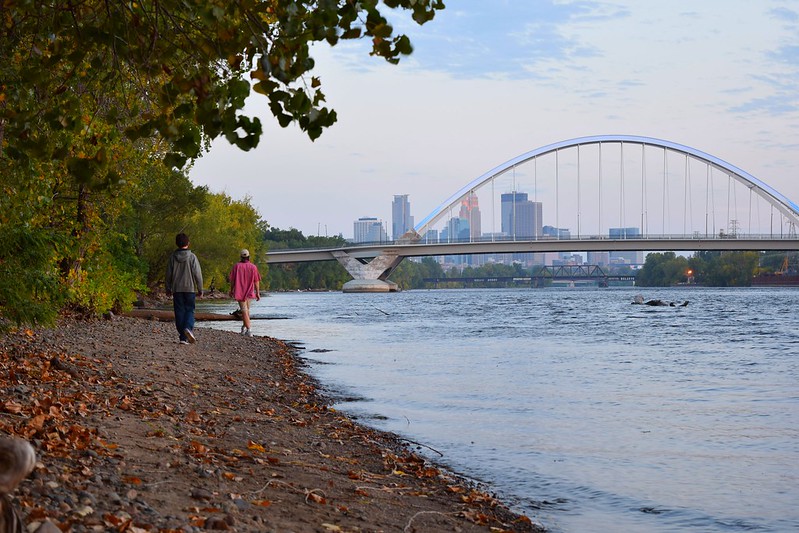 The failures of existing flood-control infrastructure force landowners to face the realities of flooding head-on. As a result, farmers are exploring alternative solutions, including nature-based ones, despite the required trade-off of taking a portion of land out of production. For instance, by intentionally allowing the river’s floodplain to flood, unintentional flooding of farmland will decrease. A study found that 8,000 hectares of reconnected floodplain would protect approximately 26,000 hectares of farmland from flooding.

The government can support this movement by making nature-based solutions a centerpiece of future flood and disaster management to address the impacts of climate change and increased flooding.

Environmental organizations and federal agencies like USACE and the Federal Emergency Management Agency (FEMA) offer incentive-based programs that sustainably mitigate floods while generating long-term benefits for farmers (such as conservation easements and reduced flood damage). However, funding remains limited, and too much is being asked of farmers. These solutions are only effective on a landscape level; therefore, individual farmers cannot be expected to assume the risk. Instead, a greater effort needs to be made through policies and funding that ensures large-scale implementation, appropriate compensation, and a high confidence in potential avoided costs of flood damage.

For instance, through the right combination of policy and market incentives, farmers in the corn belt have more than doubled crop cover from 1.9 million to 4.2 million acres over the last two decades. Growing cover crops — plants that cover the soil but are not harvested — can protect soil from erosion, improve fertility and control pests. This technique increases the soil’s capacity to recover from extreme weather and contributes to flood mitigation by storing nearly 3 times more water than bare soil. Cover crops have a low cost of $37 dollars per acre and reduce peak water levels and economic losses.

Hybrid solutions are not the panacea, but rather, a form of eco-friendly insurance that minimizes the risk of a total loss in production for prolonged periods of time. If implemented on entire landscapes and done through adequate incentives and compensation, these solutions will generate long-term net benefits for farmers.

Engineers, scientists and mayors have been calling for a new system of flood management in the Mississippi region. Solely building more human-made, or “gray” infrastructure, is an ineffective, economically unfeasible approach. As the region recovers from 2019 flooding and now faces an economic recession due to the coronavirus, this is a pivotal time to build back better. We can no longer rely on levees and other gray infrastructure alone.

Nature-based solutions, and approaches that blend gray and green infrastructure, are not just relevant on the Mississippi River. The number of people around the world facing riverine floods is expected to rise from 65 million in 2010 to 132 million in 2030. From the United States to Peru, from India to China, nature-based flood protection can help millions of people build resilience to the growing threats of flooding.

Past, present, and future of locally led adaptation
3 ingenious ways scientists in East Africa are getting rid of locusts