The majors of a number of large cities are coming together to tackle environmental challenges.

T he mayors of 12 big cities in North America, Europe and Africa pledged on Tuesday to shift their money out of fossil fuels and into green energy, buildings, transport and other investments to help them recover from the pandemic and tackle climate change.

The group of cities, which signed up to a declaration committing them to divest from coal, oil and gas, are home to more than 36 million residents and hold over $295 billion in assets.

Led by London and New York City, they agreed to take all possible steps to divest from fossil fuel companies the assets that they control directly, while also calling on pension funds managing their money to do the same.

“In London, we have demonstrated that divestment is possible and indeed essential for our future,” he added in a statement.

Khan committed in 2016 to work with the London Pension Fund Authority (LPFA) – the city’s largest local government pension provider – to move its assets out of fossil fuel firms.

The authority has since reduced its holdings in companies including ExxonMobil, Shell, BP and Coal India.

The share of the LPFA’s assets invested in climate-polluting businesses has dropped from 1%, or £43.6 million ($56 million), to about 0.2% now, according to the Greater London Authority.

Meanwhile, the LPFA has increased its green investments from £93 million to about £135 million, representing close to 3% of its assets today, city hall officials said.

Shirley Rodrigues, London’s deputy mayor for environment and energy, said the aim was to divest 100% of the city’s pension funds from fossil fuels.

But she noted that many cities, like London, have limited control over the management of their assets and cannot achieve a transformation overnight.

“The key thing is understanding where your portfolio is and where you can act, and then taking those steps (to divest),” she told the Thomson Reuters Foundation.

Cities can find guidance on how to do that in a toolkit launched by London and New York last year, she added. 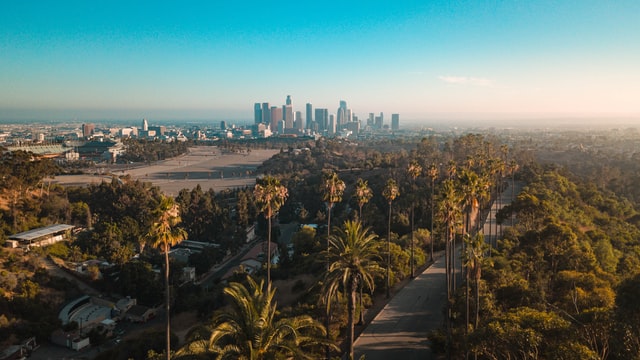 Los Angeles have joined the divestment declaration. Photo by Andy Feliciotti on Unsplash

The funds freed up by the move would be used to help small and medium businesses, social enterprises and co-operatives to participate in the green economy, he added in written comments.

Environment and economy to see the benefits

The C40 network of cities working on climate action – a group nearly all of the divesting cities belong to – said it was not possible to give an exact figure of how much will be divested from fossil-fuel companies across the 12 signatory cities.

That is because the proportion of fossil-fuel holdings within total assets varies for each city, and the decision-making power often lies with pension fund managers, over which cities have differing levels of influence, C40 said.

But greening investments made financial as well as climate sense, the group said in a statement.

Europe-based sustainable funds are estimated to yield average returns of 6.9% per year, compared with 6.3% for traditionally invested funds, according to investment firm Morningstar, C40 noted.

Vancouver Mayor Kennedy Stewart said that his city council had passed a motion in 2019 committing to responsibly divest city funds and staff pensions from fossil fuels.

“Cities like Vancouver play a key role in creating forward-looking policies that transition us from fossil-fuel dependency to renewable energy and a less energy-intensive future,” the Canadian mayor said in the C40 statement.

Rodrigues said London sought to incorporate climate action throughout its policies – from housing to creating employment in new areas such as retrofitting buildings to save on energy, and expanding electrification of transport.

It also works to persuade private financial institutions based in the city to put more capital into low-carbon investments through instruments like green bonds or the London Energy Efficiency Fund set up by the mayor, she said.

While some cities need time to put in place the necessary conditions to shift their assets out of fossil fuels, “the willingness is there”, she added.