This is Barcelona’s greening plan for happier and healthier communities

The pandemic brought back the importance of nature for many city-dwellers, spurring on movements to ‘green’ urban spaces and include climate adaptation, as well as mitigation, measures.

O ne of Barcelona’s largest parks, named after Spanish painter Joan Miro, is just a stone’s throw from the busy crossroads between Consell de Cent and Rocafort streets, but here you could be mistaken for thinking nature is a million miles away.

That could be about to change under an ambitious new 10-year plan, unveiled by Barcelona City Hall in November, aimed at drastically cutting traffic and expanding green spaces in the central district of Eixample.

The 38 million-euro ($46.5-million) plan aims to turn one in three streets in the densely populated residential and commercial area into green zones.

It responds to longstanding problems of air pollution and cramped living conditions in the Spanish region of Catalonia’s main city, brought to the fore by COVID-19, said Janet Sanz, Barcelona’s deputy mayor for ecology, urban planning and mobility.

“From an environmental and feminist perspective, the city needs to be different – to be liveable, healthy – and the pandemic has made this more urgent,” she told the Thomson Reuters Foundation in a phone interview.

The new urban design aims to put at its centre groups that have traditionally been excluded, like children, women and the elderly, she added.

The results of a tender for the design work are due early this year, with construction set to begin in early 2022.

Several crossroads in Eixample – built on a grid system in the 19th century to provide additional housing in the crowded city – will be turned into public space so that no resident is more than 200 metres from a square or small park.

“At these crossroads, where now you only see cars, you will see an urban forest, a square for children – you’ll see how we can get rid of the tarmac and have better-planted trees, which help cool down the city,” said Sanz.

Lockdowns imposed to curb the spread of COVID-19 made urban residents realise how important nature is to them personally and to their wider communities, said Josep M. Pages, secretary general of the Belgium-based European Nurserystock Association (ENA), a professional body for plant growers and traders.

“People living in cities have seen the importance, the need, to have plants nearby – and are demanding more trees, shrubs and all types of plants in the streets, parks and gardens,” he told the Thomson Reuters Foundation.

Landscape architects too are thinking “more and more outside of the box to transform, naturalise and to add green to their plans”, he said, noting cities can have vegetation almost everywhere, including on roofs, facades and streets.

The ENA launched a campaign in 2018, funded by the European Commission, to make European cities greener by boosting public awareness and influencing policy-makers through social media, advertising and events, which will now run for two more years in 13 EU countries. 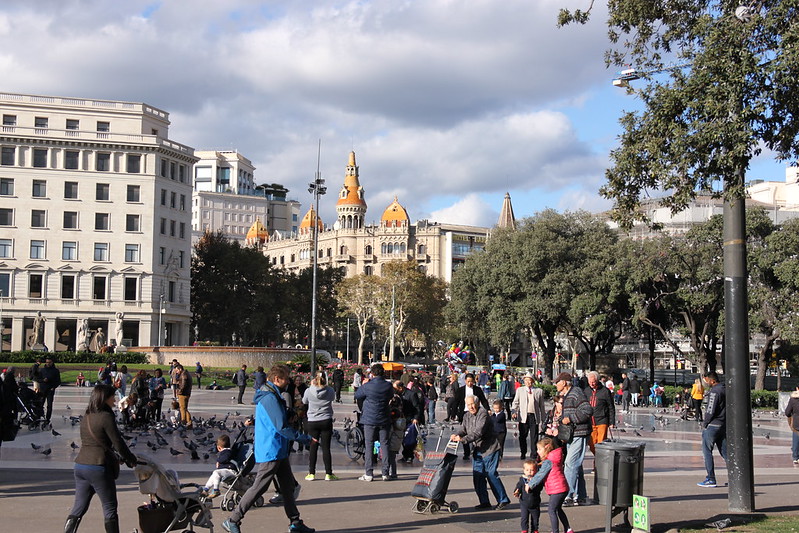 Barcelona has ambitious plans to create more green spaces within the city. Photo by Mike Finn on Flickr.

Green spaces can be useful not only to cool urban areas but also to reduce flooding in colder, wetter climates like those of Northern European cities, said Kjell Nilsson, director at the Nordic Council of Ministers’ research institute, Nordregio.

“A dense city with only hard surfaces can be quite vulnerable, especially when it comes to flooding and rainstorms,” he said. “The water has nowhere to go but the pipeline system, and when that’s full, you have problems.”

City planners globally have also been alerted to a potential link between pollution and COVID-19 deaths.

A Harvard University study, published last April, found people living in parts of the United States with high levels of air pollution are more likely to die from COVID-19 than those in less polluted areas.

Barcelona, which has one of the worst levels of air pollution among European cities, has been trying to cut back on traffic for years, reducing parking spaces and introducing in 2020 a low-emissions zone to keep out old, dirty vehicles.

Since 2016, it has also piloted a radical “superblock” scheme that redirects cars around selected inner-city zones and reclaims streets for residents, the majority of whom live in flats with very little outside space.

The COVID-19 pandemic gave city authorities the chance to accelerate experiments with traffic-quietening initiatives, including closing some roads at the weekend, extending cycle lanes and creating new pedestrianised zones.

“We took advantage of the pandemic to accelerate a number of measures that are cheaper,” said Barcelona Deputy Mayor Sanz.

She described this as “tactical urbanism”, an approach that allows local governments to test out methods before embarking on a larger, costlier plan.

Superblocks, based on groups of streets that create a local area where cars are largely restricted and roads re-purposed into public spaces, already exist in several neighbourhoods in Barcelona but the Eixample plan is a change of scale, said Sanz.

“We wanted to have a leap forward in the city as a whole,” she said.

Competition between green and grey

Pages said European cities are becoming greener in line with global trends but must grapple with limited space and history.

“It is a more difficult challenge to add green to an old European city than a less dense, relatively new American one,” he said.

“In the most dense cities, green must compete with parking lots, private and public buildings, roads and so on, which aren’t easy to transform,” he added.

Some Nordic cities – which tend to be less compact than many in southern Europe – are moving towards incorporating more wild areas into their centres, said Nilsson.

Financing is another barrier to urban greening, said Pages.

To counter this argument, planners should aim to measure the improvements green spaces bring for the health and wellbeing of their citizens and the environment, he added.

Nature-based solutions are not always enough. This is how we can build with nature more effectively
Why the private sector supports GCAs Youth Leadership Programme