As an affordable source of protein, fish and other aquatic foods play an important role in nourishing the population of Bangladesh, especially the tens of millions who suffer from ‘hidden hunger’ — severe malnutrition caused by a lack of micro-nutrients, essential minerals, and proteins needed to boost immunity.

However, poor resilience to the impacts of climate change in coastal areas has already led to a 25 percent loss of aquatic food systems production, causing a significant impact on food and nutrition security, said the Post-Doctoral Fellow in resilient small-scale fisheries.

Research and development activities need to prioritize inclusive innovations that adapt and mitigate the increasing pressures of climate change, such as weather information services and improved practices, Rumana told a group of researchers, government and development officials during the virtual discussion on WorldFish’s research towards climate-resilient aquatic food systems.

“When talking about key systems affected by climate change and variability in Bangladesh, the coastal ecosystems have been extremely susceptible. The country’s freshwater and brackish aquaculture production are highly vulnerable to change. Mangrove forest in the south-east coast, for instance, has been lost to saltwater intrusion as a result of sea-level rise and storm surges,” she explained to the audience which included UK’s International Environment Minister, Lord Goldsmith. 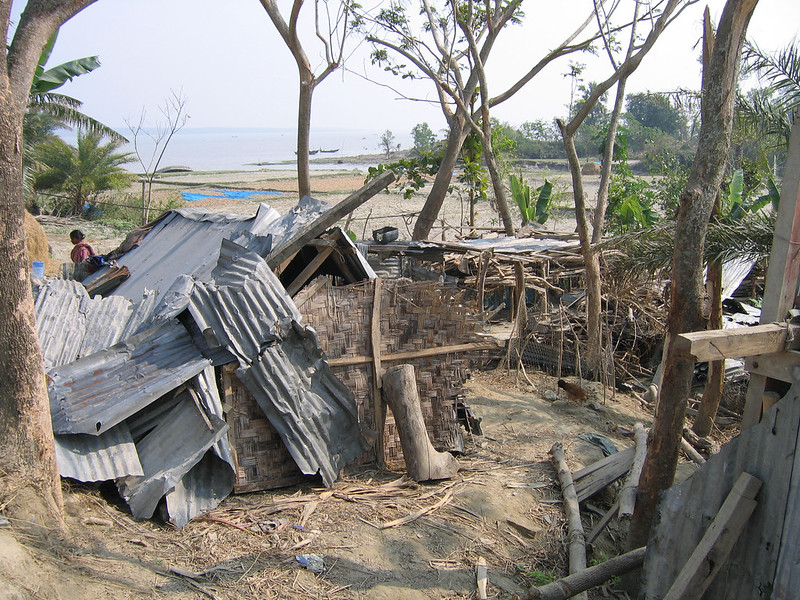 Bangladesh is susceptible to extreme weather, such as tidal surges which cause huge damage. Photo by WorldFish on Flickr.

The inland fisheries sector is also being adversely affected by climate change. Many farmers in the northwest are now experiencing food system challenges with shorter growing seasons, early drying and drought events in some areas, and inundation in other areas.

“Developing countries like Bangladesh are the hardest hit by climate change. The work taking place here to help adapt to its impacts and build resilience is an example for the world to follow. The UK is proud to support it,” said Goldsmith.

WorldFish’s approaches to conservation, adaptation, and resilience to mitigate the risks of extreme climate impacts on Bangladesh’s key food systems were detailed during the meeting.

“In addition to this, we are also piloting seaweed culture. Compared to fishing, growing seaweed is simpler. The equipment is less expensive, and the seaweed species require no feed. They grow fast, absorb atmospheric carbon, and are easy to harvest,” continued Rumana, who holds a doctorate from Wageningen University and Research in climate change impacts in coastal Bangladesh

The audience was also told about WorldFish’s genetic improvement program for rohu, the most popular carp species in the country. The program aims to boost food and nutrition security, income, and livelihoods despite the climate and extreme weather impacts through the wide-scale adoption of high-quality breeds.

The approach is to produce quality seeds that maximize genetic gains while maintaining genetic diversity within the population. Since the adaptation, the current generation of rohu has shown a 30 percent improved growth rate and is anticipated to improve by 5-10 percent in each subsequent generation. This capacity allows aquaculture production to not be affected despite the reduced growing season.

Since 2007, fish production in many important food-producing areas in southern Bangladesh has been severely impacted by extreme and unpredictable cyclone events. Sensing the urgent need for these vulnerable communities to protect their homes and secure food stock for their livelihoods WorldFish researches worked with producers to design the improved climate-smart agriculture practices.

“Through this project, we raised growing platforms, trellises, and vertical gardens that, together with fish, have shown to help diversify diets, provide micronutrients and reduce stunting in children. We have also piloted combining solar panels with these trellises over ponds for off-grid electricity very successfully,” said Rumana.

“Besides, many fish folks have lost their land due to erosion in riverine areas. In one area alone, close to 15,000 families are now living precariously on their small fishing craft with no access to land. WorldFish has helped by putting solar panels on their boats to provide light and charging facilities for mobile phones that many rely on for market information and weather forecasting.” 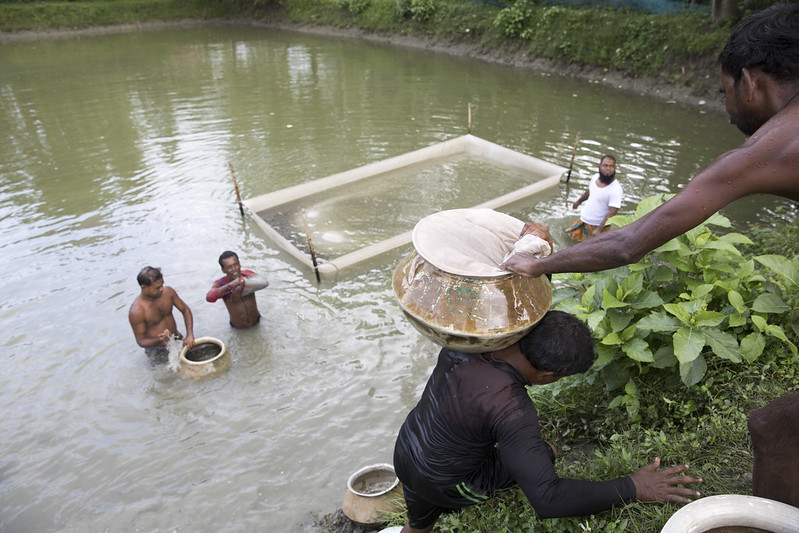 In many floodplain areas, WorldFish research programs have shown increased biodiversity and fish production by the simple inclusion of ‘submerged ponds’ at low groundwater levels. When the floods recede, fish are protected until the next flood. These are fast-growing small indigenous species with micronutrients vital for child health as well as a source of protein and income, explained Rumana.

“In rice fields, we have done a similar thing with ‘micro-rings’ or small areas of the paddy excavated to provide refuge for fish when no water is in the paddy and found great increases in productivity contributing to household nutrition and income,” she explained.

Timely, reliable, and contextualized climate information will profoundly change the climate risk equation in sectors that underpin the food security of millions in Bangladesh.

Currently, Rumana is leading the Capacitating Farmers and Fishers to Manage Climate Risks in South Asia project, which focuses on climate information services for fishers and farmers in Bangladesh and India.

“In this line, WorldFish has been engaged in extensive consultations with international, national, and local institutions operating in South Asian aquatic food systems to help close this gap for fisheries and aquaculture sector,” she said.

Following up on that, a virtual stakeholder workshop was held in September for partners to share their experiences developing the decision support tool and discuss ways to facilitate fish-farmers’ decision-making approach to reduce the climate variability induced risks.

“This kind of event for aquaculture climate service is the first of its kind in Bangladesh and largely new around the world,” said Quazi Shams Afroz, Director General of Bangladesh’s Department of Fisheries, and honored guest at the meeting.

“The role of aquatic food systems in socio-economic, nutrition, health, livelihood, and food security is wide. Climate services can play a tremendous role by providing timely information and tools to support more climate-resilient decisions,” she continued in her opening speech.

The dedication and momentum shown by WorldFish Bangladesh to help adapt to climate impacts and build resilience is an example for the world to follow. As COP26 presidents, we are encouraging countries to come forward with ambitious visions to put nature-based solutions at the heart of plans to tackle climate change, said UK Minister Goldsmith.

This city in China is implementing a crisis response to address flood risks, pollution and public health emergencies
5 ways technology is helping farmers to adapt