How ancient water conservation methods are reviving in India

Climate change is causing devastating damage to natural water cycles. In India, traditional water conservation practices are being brought back to life to meet these modern challenges.

A major impact of climate change is its damaging effects on natural water cycles. The world economic forum ranked the water crisis as its number one global risk of 2015, and already more than 2 billion people live in countries experiencing high water stress.

India is one of those countries. It uses 30% of the world’s irrigated land and consumes the largest volume of groundwater in the world, but its water is becoming harder to access. Indian innovators are looking to old ideas to address this modern problem.

Why is water a problem in India?

Changing air temperatures and circulation patterns mean that in place of India’s four-month monsoon season, the country is experiencing longer dry spells followed by short bursts of intense rainfall. This results in flooding which destroys farms and homes, in turn leading to hunger and poverty. Sewers become overwhelmed, too, so drinking water can become contaminated.

It’s not just the danger of the water itself; water scarcity is an increasing problem. India has traditionally relied on surface water – lakes, rivers, reservoirs – and groundwater – water that has seeped into the earth and can be drawn up from the ground. The long dry spells have meant the surface water sources are not being refilled while increasing temperatures (the five highest temperatures recorded in India have occurred in the last decade) mean water is evaporating from the surface more quickly. This has led to heavier reliance on groundwater accessed through wells and boreholes, which is being used much faster than it can be replenished. Water conservation has now become a huge challenge.

How can we reduce scarcity?

Nature based solutions are a way of strengthening natural processes that aid water conservation, such as protecting lakes that store surface water, or flood plains that capture water runoff.

Manmade interventions can be used in conjunction with these natural processes to conserve water for use over time. This is not a new idea: in fact, India has been doing this for centuries.

Across India are dotted many manmade pools of water, often in beautifully designed wells within temples. These are ‘step-wells’, tanks (kund), or baolis – all forms of a centuries-old method of water storage. 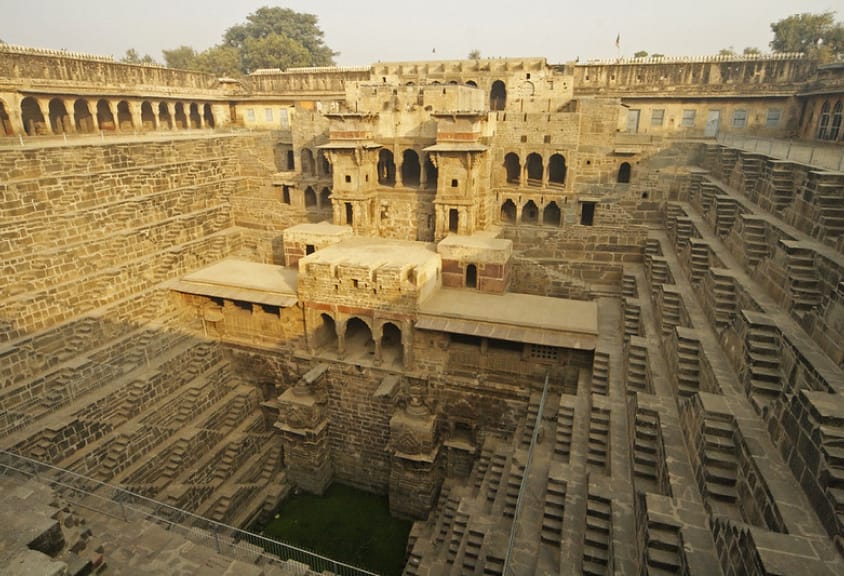 Traditional water reservoirs such as step-wells are being brought back into use to ease water challenges in India. Photo by Dixie Lawrence on Flickr

The baolis are comprised of two parts: a main tank, and a well that extends deep into the ground to draw up groundwater. The tank fills up with rainfall and via water drawn up from below ground. The tanks were traditionally used to store water for drinking, bathing and farming.

Throughout the twentieth century the tanks began to fall out of use. Part of the reason may have been the actions of British colonialists who viewed the tanks as unhygienic. Later, more modern technology was employed to access groundwater and distribute it via plumbing lines and tap systems.

Bringing water tanks back to life

Now these traditional water conservation tools are being given new life as a means to combat the effects of climate change.

In Chennai, the City of 1000 Tanks project is repairing existing tanks, and building new ones along with treatments stations. Previously, to prevent flooding, huge rainfalls would be diverted as quickly as possible out of the city. Now, the Water as Leverage program is storing clean water so that it can be used by the population of Chennai during dry months.

Similarly, in Maharashtra, the NGO All World Gayatri Pariwar is bringing back to life 52 puratan kundas – ancient water reservoirs – in Alandi. These reservoirs had become polluted through disuse. By cleaning up and maintaining this ancient water conservation system, it can help combat water scarcity in the region.

Other traditional methods are being reinvented

It’s not just traditional water tanks getting a makeover. In rural Rajasthan, a thirty-year project has helped local people build 10,000 johads – earthen dams – that have rejuvenated underground water storage and enabled the long-dry rivers to flow once more.

Meanwhile, an engineer from Ladakh saw how mountain glaciers in this desert region of the Himalayas were disappearing as a result of rising temperatures. Local people rely on melting glaciers for water. Sonam Wangchuk came up with the idea of a manmade glacier – a chunk of ice in the shape of a cone. Thanks to the low surface area exposed to the sun, the huge ice stupa melts slowly, feeding rivers and pools and delivering sustainable water for local people.

Climate change is threatening access to water worldwide. Disruptions in the water cycle are harming the natural environment and human health, especially for those living in poverty. While innovation is often the key to combatting new challenges, India’s rejuvenation of ancient water conservation technologies shows us that we can always learn from the past, too.

How conservation agriculture practices are flourishing in Zimbabwe