F armers in Mali, who volunteered to grow climate-resilient and locally adapted varieties of sorghum, pearl millet, groundnut and cowpea crops under the UE-APSAN-Mali project, demonstrated the superior features of their crops during a field visit by other farmers, seed producers and local officials. Small groups of selected highly motivated farmers identified through project implementing partners had carried out testing trials and demonstrations on their pilot plots.

In front of her sorghum demonstration plot, Mrs Baro Coulibaly from the Local Union of Cereals Producers (ULPC) is happy to explain the qualities of Soubatimi, a sorghum variety, saying, “Soubatimi is very productive; good for both human consumption and animal feeding.”

“The varieties demonstrated here are better compared to our local varieties,” says Mr Amadou Diallo, a cowpea producer. Another woman farmer, Ms Awa Konaté from Diarani village in the Commune of Wakoro, Dioila, tested three varieties of groundnut, of which two have performed well. “These two new varieties are promising a good harvest. I encourage everyone, especially women, to try these new varieties during the next cropping season.”

In the demonstration trials of improved pearl millet varieties, Dr Daouda Sanogo, Millet Breeder at the Institut d’Economie Rurale- IER Mali, invited producers to carefully look at performance of different varieties and to position themselves in front of their preferred one. Standing with him, Mr Lassina Traore, Mayor of Dioila, a special guest of the event, explained his preference for Maiwa, a new variety in the agenda of this year 2020 farmer’s field visit. “This is a variety that exhibits plant vigor, stay-green leaf, and bold grain compared to many others,” he said. Beside him, another producer explained his choice for Maiwa because of its resilience to drought. “Maiwa stays green despite drought, which is a major challenge. I would like a variety like this to be made available on a large scale. This field visit is useful, and a very effective way to educate more farmers about the benefits of improved varieties.”

In M’Pessoba too, the farmer field visit was attended by local authorities led by the Mayor Mr Kalifa Coulibaly. Mr Dramane Sibiry Coulibaly, a sorghum farmer, described how he was involved in the experience of testing new varieties of the project. There were many varieties to which members of his Jigiseme Cooperative were exposed this year, but Tiandougoucoura got his preference. “This year I volunteered to test three varieties – Tiandougoucoura, Samboni, and Soubatimi – along with a local control. I noticed that the new varieties have good germination, they are very early-maturing, their plants are vigorous and their leaves stay green up to maturity. Among them all, Soubatimi is the earliest maturing; it shows good grains compared to the control. Also, its stems are liked by animals. During the next cropping season, I would like to enlarge my production plot, especially with Tiandougoucoura and Soubatimi, which are good for livestock feeding,” Mr Coulibaly said. 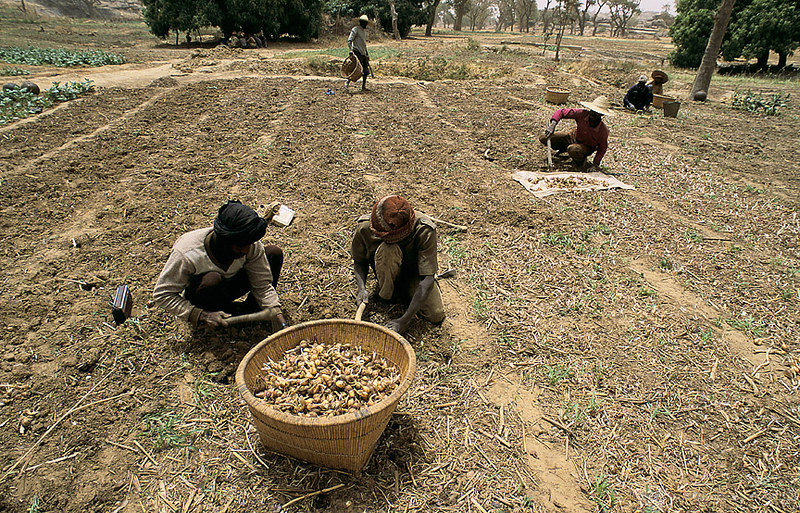 Mr Souleymane Ballo, President of the Jigiseme Cooperative of M’Pessoba, showing his sorghum hybrid Pablo seed production plot of 1 hectare, said, “We have 13 other plots of the same size with different members of our cooperative. We focus on seed production because it is a good pathway to achieving food security. Per hectare, we can harvest about one ton which is sold at the rate of 750 FCFA per kg. It is a really profitable business. This year, we have already secured a contract with a buyer for part of harvest. We hope that many farmers visiting this sorghum seed production plot will be encouraged to join us in this journey”.

Dr Baloua Nebie, Sorghum Breeder at ICRISAT and Coordinator of the UE-APSAN-Mali project, said, “All the improved varieties and hybrids in the demonstration plots are registered in the regional seed catalog. Farmers’ organizations and seed companies start their seed production to meet the demands.” Echoing his words, Mayor Kalifa Coulibaly also commended the project to participants, saying, “This project perfectly meets the objectives of the Government of Mali towards achieving food and nutritional security, as well as the promotion of employment in the context of climate change.”

For Mr Mama Berthé, who tested new cowpea varieties, the goal was to evaluate their performance in terms of yield and probably take them on a larger production plot during the coming cropping season for both family consumption and for the market. “I notice that two of the varieties tested – Acar 1 and Simbo – are early-maturing and are adapted to the increasingly short rainy season. In addition, their grains are big and attractive. If the harvest is good, I would like to grow the best variety on one hectare next year, moving from testing to expand my cowpea production.”

“Field trials and demonstrations plots are how productive, nutritious and high-yielding varieties are identified, evaluated and promoted in a very participatory and inclusive manner. Once the field trials are conclusive, it makes it easier to move on to demonstrations that will include an important number of members of in cooperatives,” said Mr Madou Goita, President of Seneyiriwaton, a seed cooperative based in Kiffosso 1, Sikasso region. “We will seek foundation seeds from the researchers to produce the most preferred varieties identified. With the UE-APSAN-Mali, this year we have tested 28 sorghum hybrids and 24 OPVs. We have also tested 13 new varieties of millet compared to a control.”

“The world is changing and the climate too. To face this change, researchers are pursuing research and are making progress every day. As farmers, we need to follow the new development,” concluded this experienced seed producer, a national silver medalist recognized for his contribution to Malian agriculture.

Dr Mamoutou Kouressy, Coordinator of the UE-APSAN-Mali for IER, said, “Indeed the farmers’ field visit offers the opportunity to pilot farmers to share their experiences with those who did not participate in the testing work. It is also an opportunity to witness the adaptation of new varieties to farmers’ environments.”

During the field visits, conducted on 22-23 October 2020, flyers with the key characteristics of the varieties/hybrids and the contacts of the seed production units, were distributed to participants so that they could have access to the seeds of their preferred cultivars. The event included some sensitization on COVID-19 preventive measures.

This Climate-Smart Village in Mali is testing agricultural innovations

How conservation agriculture practices are flourishing in Zimbabwe