Honorable Members, Mr Speaker, What a source of inspiration you are for the world.

In 2009, you awoke society from a slumber – a planet sleepwalking into climate danger. Your underwater cabinet meeting captured the world’s attention, and its imagination, prompting us all to consider, and start to confront, a planetary crisis.

My name is Patrick Verkooijen and I am the CEO of the Global Center on Adaptation. We are the only international organization with a mission to ensure our society, and all its communities, can adapt together to the global crisis of climate change. And I am honoured to be given the opportunity to address this parliament because the Maldives is the embodiment of the frontline of the climate crisis. But you are also much more than that.

The impact of our changing climate has also forced you to confront the crisis earlier and more concertedly. After all, two thirds of your almost 1,200 islands suffer chronic shoreline erosion from rising seas. You have fought back by being bold and successful in forging solutions. 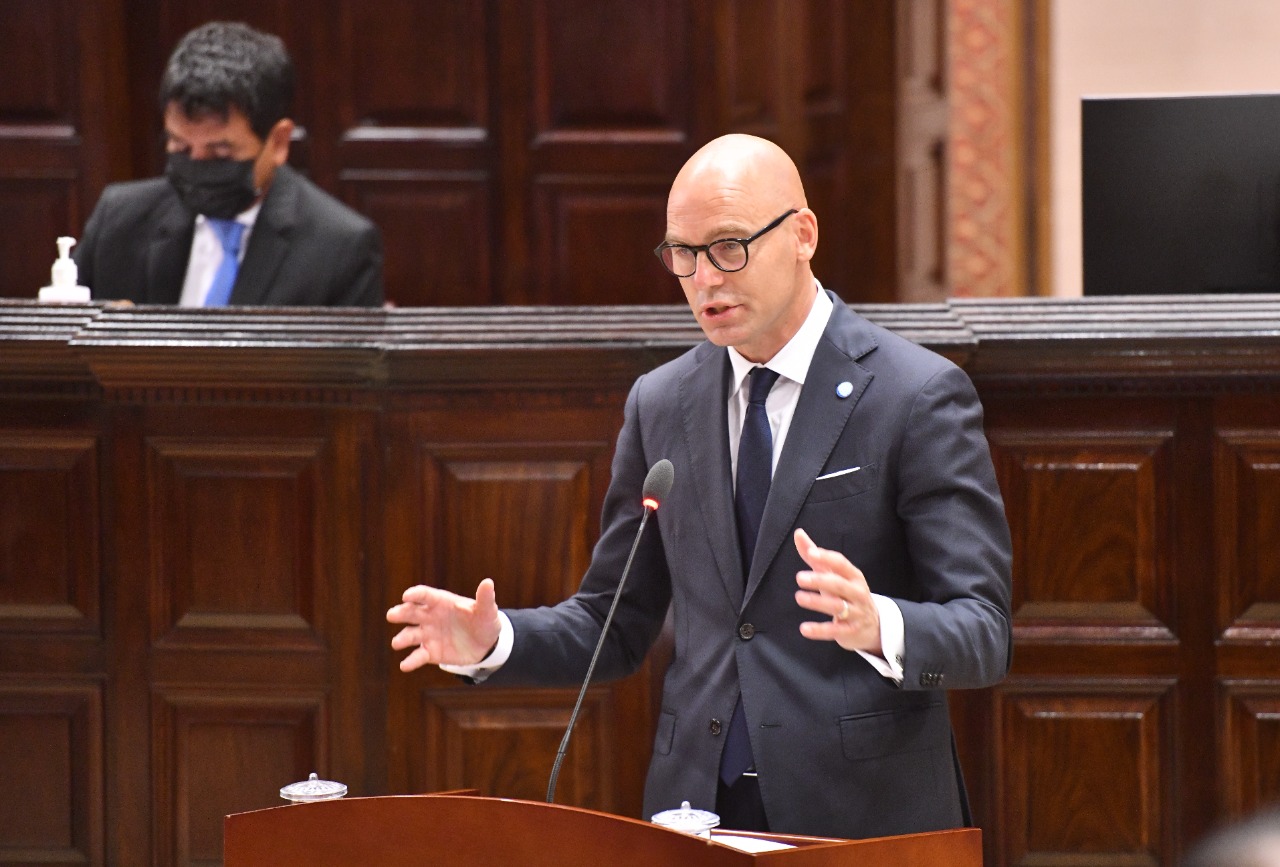 This is not my first mission to an atoll nation but this is my first – and I hope not last – visit to the Maldives. I was very grateful that yesterday – thanks to Minister Shauna of President Solith’s cabinet – I was able to visit the major new developments of phase one and two over the bridge at Hulamale’. You might not think of it like that. But Hulamale’ is a climate adaptation project. Why? Because it will be the home to 200,000 people – close to half your current population – safe from the sea-level rise projected in this century and a water supply protected from salt intrusion. As a single project, it is quite possibly the biggest and boldest adaptation effort on the earth today.

It took the Netherlands, where I am from, with all its civil engineers and resources centuries to put in place the infrastructure that allows about one third of the country to exist below the level of the sea. Here in the Maldives you have reclaimed phase 2 of Hulamale in a matter of weeks.

Yet, we all know it is not enough, and neither would it likely be your vision for the future of this nation as a whole. For one, you may reclaim more islands as safe-havens, but you could ultimately lose everything else that’s unprotected. Island building may work well in some cases – like in Male’ – but is ultimately not a global solution.

Mr. Speaker, It might surprise you, but for a brief period back in 1993, I myself was a climate displaced person. Europe was hit by severe floods and my own home town was completely flooded. We were forced to evacuate, leaving my father sitting on the rooftop. He didn’t want to abandon the home and all our possessions. We survived and since then, the Netherlands has put a lot of effort into beefing up so-called “Nature Based Solutions” to complement the shortcomings of our water infrastructure.

Last summer the floods returned to Europe with heavy rains of the same magnitude but in the Netherlands, we were hit hard but managed to significantly reduce the impact. In Germany, just upstream from us, there was a level of destruction, and a claiming of lives and livelihoods, that was totally shocking for us all.

What we take home from this is:

One: Mr. Speaker, I believe we can say “We are all Maldivians” in this climate fight. We are all vulnerable already today – everywhere. But also, this means that failing the Maldives means failing us all. We are all Maldivians since by not defending this small island nation and its people from climate devastation, we only prove that we will be incapable of defending the planet and society as a whole.

Two: to overcome the power of nature we have unleashed by wrecking the planet we should be turning to nature and harnessing its power to persevere. Nature-based solutions – here in the Maldives: mangroves and reefs, for example, should be central to getting the job done. 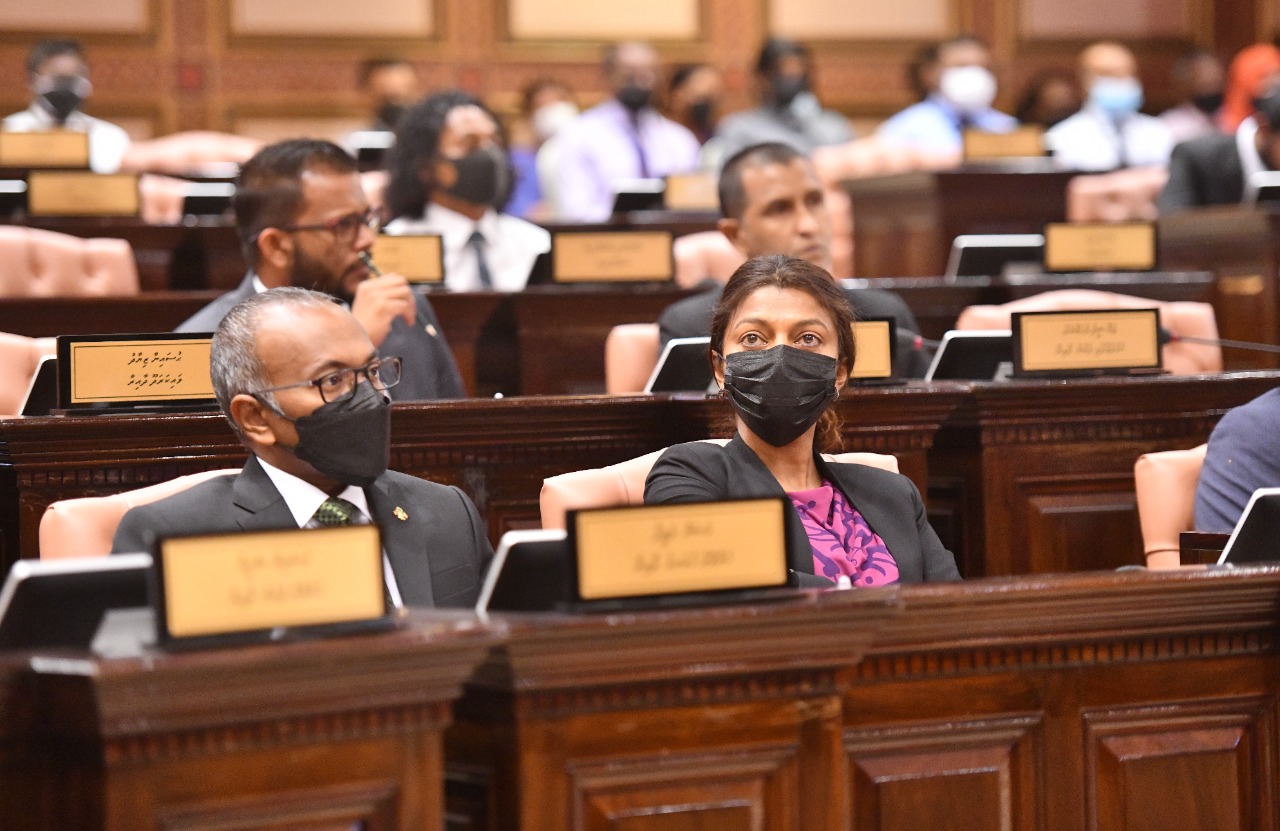 Also yesterday, I was fortunate to visit a reef in South Male’ atoll. I was deeply saddened to find an underwater coral graveyard, but not so surprised either: this has become the hallmark of the global devastation of reefs happening in every Ocean today. I am also aware of the solutions you have started to pioneer on coral reefs locally – even 3D printing of reef structures – but we have to move faster and we have to have solutions that function at scale.

In the Netherlands it’s mid-winter right now, and I, for one, am really feeling the heat. But I am certain you have all been feeling the heat. The IPCC confirmed in the second half of last year that the world will now warm by 1.5 degrees by 2030. This is a decade earlier than the IPCC was highlighting just three years prior.

This massive increase in heat has been shown by the ILO to have an especially heavy toll on workers across South Asia. This is because the combination of rising heat and high humidity is a costly, toxic and often lethal combination. If you are not already having your houses and offices insulated like we do in the Netherlands against the cold, that will have to change. Because the heat is coming for you, and it will be nothing like what you have experienced in the past.

It is not only the air that warms, as you will also be aware. The Oceans are also heating up. This is why 90% of all coral reefs are predicted to be dead by 2030. Fisheries, one of your traditional mainstay industries, will also be affected. And Maldives risks losing its edge as a tourist destination to crumbling reefs. 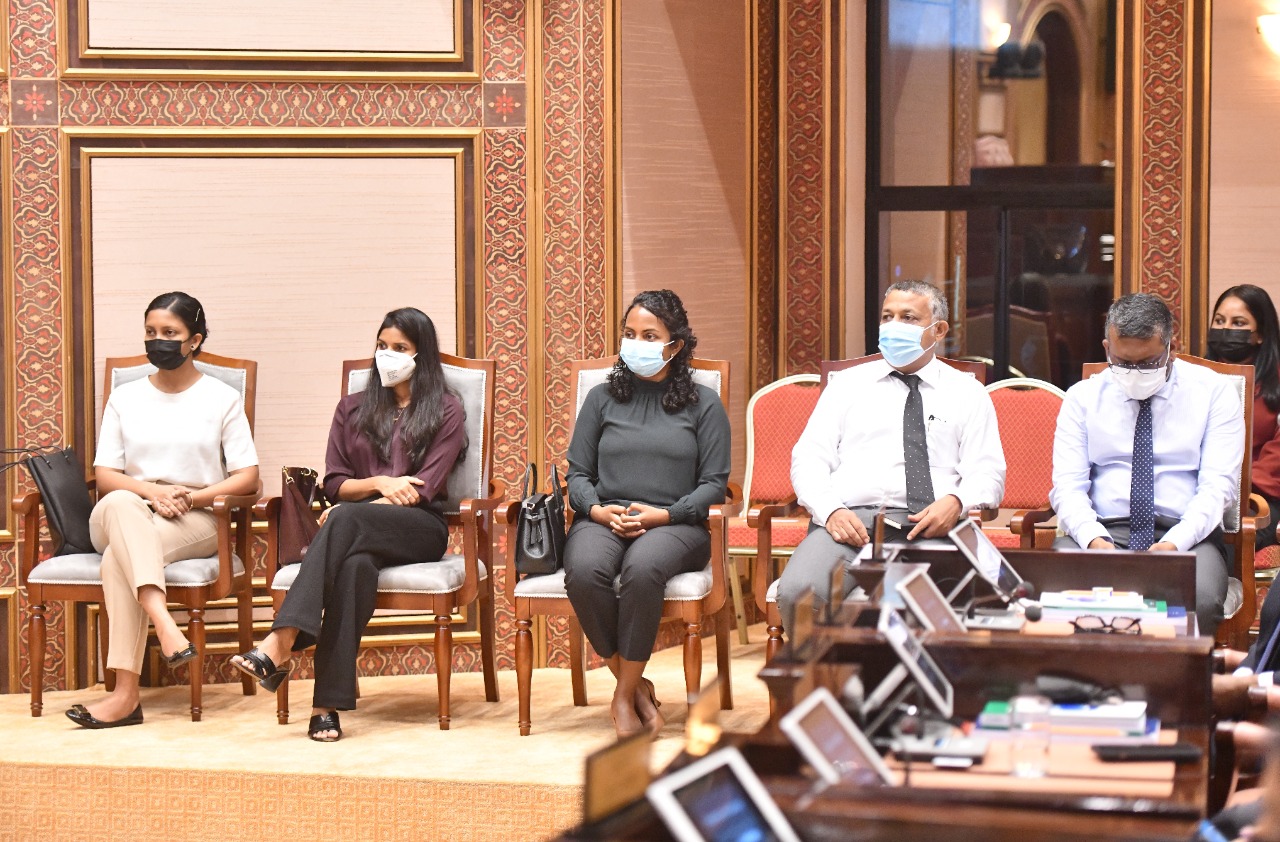 Mr Speaker, we are already living inside the eye of the storm. You know very well the leadership that is required to avert climate catastrophe. You yourself are the founding president of the Climate Vulnerable Forum (CVF) and its lead envoy. Your group clearly emerged at COP26 – thanks very much to your own leadership and Prime Minister Sheikh Hasina’s – as the leading global voice for action in the UN climate negotiations. It’s above all the CVF that put 1.5 degrees into the Paris Agreement, and the Global Center on Adaptation is proud to also act as your Managing Partner and to host the CVF and V20 secretariat.

As a part of my delegation here today are executives from the CVF and V20 secretariat who will be meeting with your government to work on your own national climate prosperity plan. Some 30 CVF members are lining up to develop these plans with Bangladesh being the first. Also the brainchild of Speaker Nasheed, the CVF prosperity plans are strategies that aim to deliver climate action while boosting economic growth and key socio-economic indicators like biodiversity, jobs and health.

Mr. Speaker, the Maldives cannot save the planet from itself if others fail to follow your act. Global leadership has been strengthening, however, global emissions are still rising. The world needs your leadership from this House to be shown by other parliaments across the globe. That will be vital to keeping the Maldives safe. 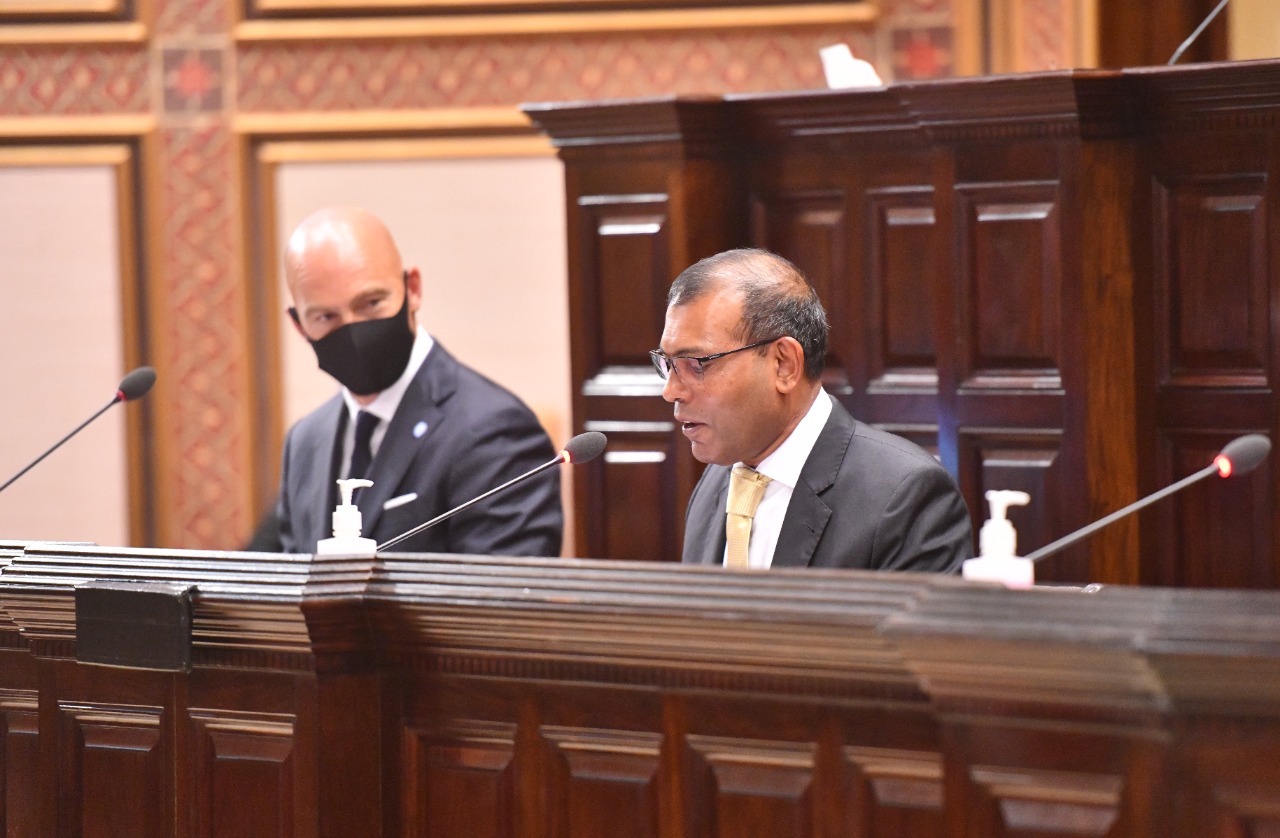 And let us also be very, very clear: Action in Maldives and action around the globe requires finance – money is a must. Also in 2009, when you came to Copenhagen Mr. Speaker, the world agreed to $100 billion annual finance for developing countries. The world has failed to deliver that promise. It has failed the Maldives and it has failed itself.

Climate change, as I mentioned earlier, has been found to be happening far faster than we previously thought. And its repercussions are far more widespread and devastating than we thought a decade ago.

Independent information points to you already spending about 50 percent of your 2.5 billion dollar national budget on adapting to climate change. So climate adaptation is already your number one public fiscal expense!

After the 2008 global financial crisis, the United States congress approved $700 billion in single bail-out a handful of big banks and lenders. Nowadays, the trillions of domestic COVID pandemic bailouts in G20 economies have made that once historic spend look like small change.

And yet, nothing today is more systemically corrosive to the world economy than climate change. The only real solution also on finance is to think big and act at scale.

For that, we should first look at the trillions of debt currently owed by poor, debt-distressed, climate-vulnerable nations to rich ones. If we restructured all or much of this debt by allowing servicing payments to be reinvested in making the underlying assets more resilient and secure, everybody wins. This could immediately free up far more than $100 billion a year for nature-based and resilient investments and creditors should be more than satisfied with better safeguards against losses triggered through climate catastrophe.

The Global Center on Adaptation, through our offices in Europe, Africa, China and around the world, we are pleased to play the role of solutions broker and to facilitate cooperation including on financing.

I also would like to specifically highlight what we have done with the African Union last year, creating a $25 billion dedicated regional climate adaptation program of the GCA with the African Development Bank, under the leadership of my friend and brother President Adesina. In its first year, through what is known as the Africa Adaptation Acceleration Program (AAAP), the GCA have shaped climate adaptation responses within a billion-dollar pipeline of investments of the African Development Bank. We are already driving impact in the areas of digital solutions for food security, nature-based infrastructure, access to finance, and developing jobs for youth. Small islands desperately need such a funding program of their own.

Mr Speaker, your underwater cabinet meeting shone a light on the crisis we face. Today, we need to do the same thing for the solutions to the crisis. Should we not work together to forge a global small island states “Accelerated Adaptation Program” on a similar scale to our $25 billion dollar African program?

The Global Center on Adaptation already has a South Asia program headquartered in Dhaka, Bangladesh. And our research and expertise will be available to you from that hub. But should we not launch such a bold adaptation program for SIDS together this year from the Maldives – as a showcase of our ambition?

We do need to think big. We need more moves like the IMF’s channeling of finance from its latest $650 billion of Special Drawing Rights into a Resilience and Sustainability Trust to support poor and emerging nations. Or the V20 Finance Ministers’ proposed guarantees scheme, which could leverage $15 of climate adaptation and renewables projects for every $1 of public funds contributed.

Mr Speaker, Honorable Members, I hope you will see GCA as your partner as together we combat climate change, for what happens here is important not just for Maldives. Because by joining forces we can demonstrate what is possible when commitment is combined with leadership. By accelerating the actions to safeguard the future of the Maldives, I am positive we can secure a safe and prosperous future for this great island nation.

I look forward to working with you all.

I want to come back finally, once more, to my earlier point: we are all Maldivians, after all.

We need to come together. Only together can we prevail against an existential threat like the climate crisis.

We Are All Maldivians

“We are all Maldivians now,” says Patrick Verkooijen in inaugural address to Parliament to announce new GCA initiative to support Parliamentarians