President Kenyatta has been a key driving force behind the AAAP, an Africa-led, Africa-owned initiative jointly developed by the Global Center on Adaptation (GCA) and the African Development Bank (AfDB) which is mobilizing US$25 billion for climate adaptation in the areas of food security, resilient infrastructure, adaptation jobs, and climate finance by 2025.

As the Global Champion for the AAAP, President Kenyatta will continue, in his personal capacity, carrying forward his bold leadership on climate adaptation in Kenya to mobilize the global community to honor their commitment of doubling global climate finance.

“Africa – indeed the world – is confronting multiple global shocks that are reverberating
through our economies. The catastrophic drought in the Horn of Africa, exacerbated by climate change, is threatening lives and livelihoods, and needs an immediate response. Many African nations, including Kenya, are suffering losses of about three percent of GDP
per year because of the present climate threat,” President Kenyatta said.

“I accepted the role of Global Champion for the AAAP to give impetus to the critical actions and global finance needed to address the climate and food crisis today, and to build a more resilient continent. AAAP is Africa’s plan that puts Africa’s youth and jobs at the center of the adaptation agenda for a green, prosperous Africa.”

President Kenyatta’s support as Global Champion for the AAAP is critical ahead of the ‘African COP’ at Sharm El-Sheikh in November 2022 for accelerating adaptation action and to drive substantive contributions to the AAAP at the Africa Adaptation Summit: GCA High-Level Dialogue for COP27, which will be held at the GCA headquarters on Monday 5 September. AAAP’s catalytic interventions have already rapidly delivered impact at scale by mainstreaming adaptation into projects worth over $3 billion since 2021. 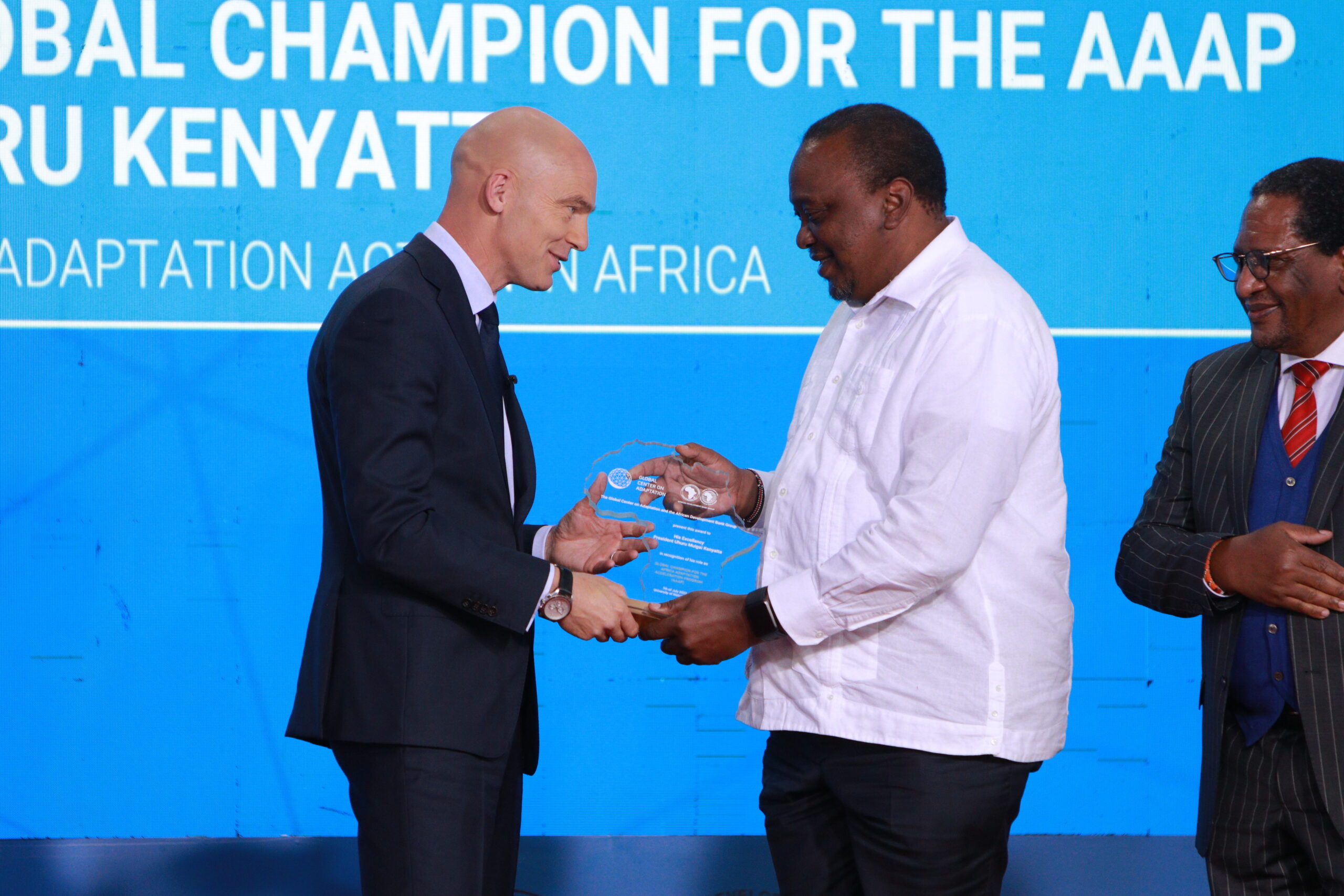 In a statement to the press, Professor Patrick Verkooijen stated that, “Africa is tired of waiting — I am deeply honored to continue working alongside President Kenyatta for Africa to build forward better by financing a greener, more resilient, and prosperous continent that puts people in the driving seat.”

Ban Ki-moon, Chair of the Global Center on Adaptation and 8th Secretary General of the United Nations said: “Your Excellency, I know your proven leadership on climate adaptation in Africa. You are and will be the strongest voice for mobilizing the global community, for making sure countries honor their climate finance commitments, for making sure they will get behind the largest adaptation initiative on this great continent.”

Kristalina Georgieva, Managing Director, International Monetary Fund said: “Mr. President, your leadership has already inspired others to step-up and accelerate action to tackle global warming, and there is no one better to champion adaptation in Africa, including the financing that is so badly needed […] This is why the AAAP and its upstream financing facility is so important.”

Ngozi Okonjo-Iweala, Director-General, World Trade Organisation said: “I would like to commend my brother, Uhuru Kenyatta, for being a driving force behind the Africa Adaptation Acceleration Program. His strong voice and leadership will inspire others to scale up and accelerate the actions required to adapt to climate change. As an eminent international statesman, President Kenyatta’s leadership on this issue is much appreciated and is a powerful example to others.”

Dr Akinwumi A. Adesina, President of the African Development Bank Group said:
“I would like to applaud the decision of Secretary-General Ban Ki-moon, former UN Secretary-General of the United Nations, now the Chairman of the Global Center on Adaptation and, of course Professor Patrick Verkooijen, Chief Executive Officer of the Global Center on Adaptation, in selecting you, President Kenyatta, as the global champion for Africa Adaptation Acceleration Program. The timing is right, just ahead of COP27, the Africa COP, in Egypt. It is time to turn promises into resources. It is time to turn exaltation into execution. It is time to turn hope into reality. And for that we need a champion, a tested leader, with a respected global voice. President Kenyatta is a doer. President Kenyatta is a climate friendly leader. President Kenyatta’s dynamism, voice and leadership will help as we drive for greater financing for climate adaptation for Africa.”

Notes to Editors
About the Global Center on Adaptation
The Global Center on Adaptation (GCA) is an international organization which works as a solutions broker to accelerate action and support for adaptation solutions, from the international to the local, in partnership with the public and private sector. Founded in 2018, GCA operates from its headquarters in the largest floating office in the world, located in Rotterdam, the Netherlands. GCA has a worldwide network of regional offices in Abidjan, Cote d’Ivoire; Dhaka, Bangladesh and Beijing, China.

Leaders’ Dialogue on Adaptation Action in Africa: Inauguration of the Global Champion for the Africa Adaptation Acceleration Program