The impacts of climate change on agriculture are vast and varied but one common way for farmers to adapt is through water management and efficient use of land. Ancient rice-fish production systems have been doing this for millennia.

D esigns on ancient Chinese pottery show us that integrated production of rice and fish in the same space is at least 2000 years old. Today, in a world where modern agricultural systems simultaneously fail to deliver nutritional benefits for huge numbers of people, wreak environmental damage, and are highly vulnerable to the impacts of climate change, there is renewed interest in reviving and enhancing this age-old form of food production.

Research by World Fish, the International Water Management Institute and the International Rice Research Institute, some of which is summarized and synthesized with agroecology experience from World Agroforestry (ICRAF) in a newly published journal article, demonstrates that rice-fish systems can make efficient use of increasingly scarce water and land resources and reduce the need for chemicals in rice production. The fish both fertilize the rice and help control pests. In addition, rice-fish systems can contribute to local food and nutrition security and, because fish are worth more financially than rice and reduce the need for purchased inputs, often generate more income per hectare than rice monoculture. There is also evidence that rice-fish systems are more resilient to the impacts of extreme weather, further enhancing their sustainability.

The rise and risks of monoculture farming

The Green Revolution allowed countries in Southeast Asia to make significant advances in producing large volumes of food for rapidly growing populations. The region today produces more than 200 million tons of rice annually, providing the staple food for 600 million people. Similarly, in a region where fish are the main source of protein for most people, aquaculture produces 23 million tons per year, more even than marine fisheries. Over the past 50 years, impressive gains have been achieved and famines averted, largely by intensifying food production in monocultures of both rice and fish.

Monocultures enable economies of scale that boost short-term profits for rice and fish farmers. However, the lack of diversity in monocultures eliminates many of the functions that nature provides for free and means that farmers have to rely on synthetic chemicals – herbicides, pesticides, insecticides, antibiotics and fertilizers. This in turn leads to soil and water pollution, environmental degradation and further loss of biodiversity which, in time, undermines system resilience and makes monocultures increasingly vulnerable to weather extremes and climate change. This combination of input dependence and risk of crop loss can also lead to farmer debt and vulnerability.

Moreover, despite the fact that agricultural production has outstripped population growth, malnutrition remains a pervasive problem in many Southeast Asian countries. Millions of people eat too much rice and not enough nutrient-rich foods, such as fish, with the result that too many people are undernourished and levels of stunting and wasting in children are unacceptably high. 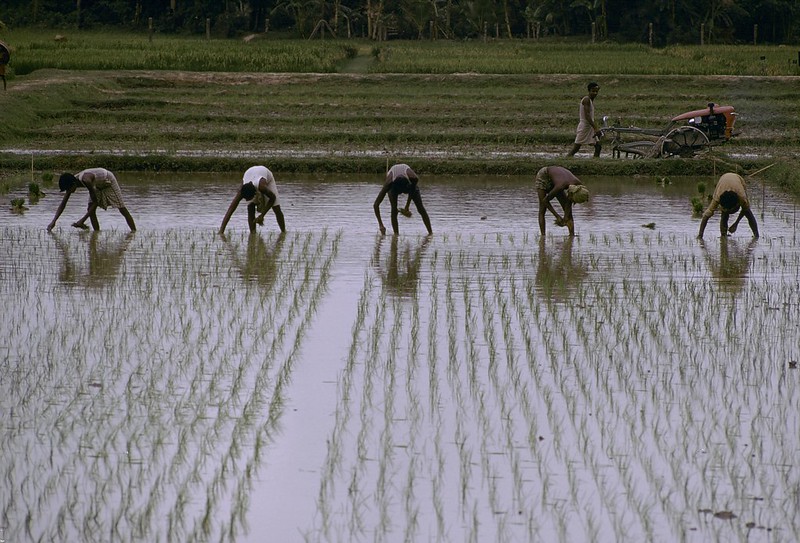 Across Southeast Asia, integrated rice-fish systems declined through the Green Revolution as intensive monocultures became increasingly prevalent. Nevertheless, such systems remain important in some places and, as priorities for food production change, offer significant opportunities for innovation and expansion.

Throughout the region, most lowland rice is grown in standing water. Consequently, rice and fish can, under the right circumstances, be present at the same time, integrated in the same field. In rainfed rice landscapes that lack irrigation infrastructure and allow natural flooding events, wild fish often use the shallow, temporary, rice field wetlands as feeding and spawning grounds. ‘Rice field fisheries’ allow the capture of these wild fish from rice fields and associated habitats and are currently most widespread in Cambodia. When fish are integrated deliberately through stocking in flooded rice fields, this is often referred to as ‘co-culture’ of fish and rice. Some of the best known and longest standing co-culture systems are in China, but this practice occurs in many countries, including Bangladesh, Indonesia and Vietnam.

In other places, rice can be grown when water is relatively scarce in the dry season, and fish can be grown when the land is flooded in the wet season. Today, this alternating form of rice-fish production is most common in the Ganges Delta, in Bangladesh.

In rice-fish systems where fish are introduced it is critical to ensure that water flows and depth are sufficient for fish to survive and grow to maturity. This requires careful management of water levels in the field. Wild fish tend to be more adapted to fluctuating water levels. Many species utilize a prolific reproduction strategy to cope with losses, and some species can even burrow in muddy pools and breathe air to ensure their survival as waters recede. Still, wild and cultured fish can both benefit from deeper water ditches or small ponds, so called fish ‘refuges’ that may be constructed or natural and that improve fish survival when water levels drop. Using refuges in co-culture systems means that in places it is possible to harvest two crops of faster growing rice and a single crop of slower growing fish.

Learning from the past for a sustainable future

Throughout Southeast Asia, the predominant contemporary approach to food production must change in order to meet nutritional, social and environmental needs. Rice and fish monocultures are unsustainable, contributing to negative environmental and social impacts. There is increasing recognition that in many places the practices of the Green Revolution have reached the point of diminishing returns.

Against this background, government priorities are changing. Policies increasingly focus on greening economies, expanding nutrition security and building community resilience. Rice-fish systems have an important role to play but are not a panacea. Asia’s food systems need to make strategic use of a diverse range of food production practices, including the variety of integrated rice-fish systems, to deliver on their nutritional, income and environmental objectives. Our research has provided evidence of the many ways in which rice-fish systems can be adapted to help provide the food system transformations required. Shifts in the planning and decision-making around food systems may involve policies that incentivize farmers to change their current agricultural practices, or to maintain beneficial practices, and must include careful management to ensure long-term sustainability.

Rice-fish systems provide useful solutions to many contemporary challenges. They represent an ancient practice that, if managed correctly, can, serve future generations well.

How watershed management is improving community resilience in Rwanda and Uganda
Nature-based solutions are not always enough. This is how we can build with nature more effectively

This is Barcelona’s greening plan for happier and healthier communities