S outh Asia is one of the most affected regions by the impacts of climate change. The IPCC’s Sixth Assessment Report concludes that Asian countries will face rising temperatures, longer monsoons and sea level rise. In particular, rising sea levels and flooding pose a threat to  Bangladesh, India, Pakistan, and Sri Lanka. One fourth of the world’s population and an estimated 616 million children live in South Asia. UNICEF’s Report Reigniting Opportunities for Children in South Asia shows that these children are particularly at risk to the impacts of climate change due to high levels of poverty and a lack of effective safety nets.

The Asian Youth Adaptation Forum, through its successive sessions aimed to:

The forum, organized and co-moderated by Youth Advisory Panel members Irfan Ullah from Pakistan and Cathy Li from China, engaged youth and decision-makers from Asia in four sessions moderated by Adriana Valenzuela, GCA’s Thematic Lead for Youth Leadership and Education.

Keynote speech by Prof. Saleemul Huq
Prof. Saleemul Huq, former IPCC lead author, adaptation negotiator for Bangladesh and GCA’s Senior Advisor on Locally-Led Action, shared his views about involving young people in the international adaptation agenda. In particular, Prof. Huq, who is the Director of the International Centre for Climate Change and Development, emphasized that climate negotiations should establish a sub-goal on youth participation in the Global Goal on Adaptation.

“I very strongly feel that young people’s development and adaptation should be one of the goals. We should be measuring young people’s involvement in adaptation as a metric to determine if we are achieving progress towards the Global Goal on Adaptation.” ~ Prof. Saleemul Huq 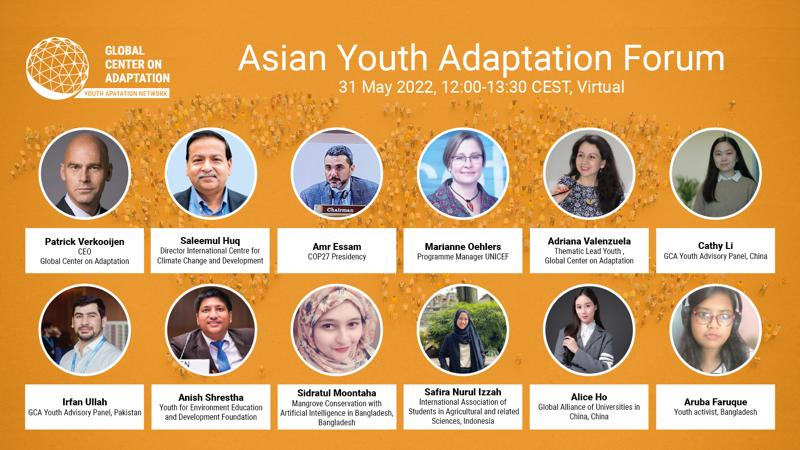 The session was kicked-off by Mr. Youssef Nassef, Director of Adaptation at UNFCCC, and was followed by a discussion with panelists:

The panelists discussed the necessity of capacity-building and climate change education for youth to engage in designing adaptation policy at the regional, national and local level. Oehlers shared that UNICEF’s research in Bangladesh shows that 70 percent of young people learn about climate change in school, but 50 percent don’t understand what it means. Oehlers shared that there is a need to empower young people to engage in policy-making and locally-led action.

“We have a global crisis and we need a global solution. Young people are already doing action on the ground. We are adapting to the impacts of the climate crisis.” ~ Anish Shrestha

“This is the time for people working in government and the UN system not to talk too much but to listen to youth. What can we do to support young people?” ~ Marianne Oehlers.

The panel started with a video about Carolyne Mukuhi Mwangi from Kenya, YouthADAPT Winner 2021. The Youth Adaptation Solutions Challenge (YouthADAPT) is an annual competition and awards program for youth-led enterprises organized by GCA and the African Development Bank (AfDB). The competition aims to broaden economic  opportunities for African youth by awarding winners business grants of up to $100,000 each and the opportunity to participate in a 12-month business accelerator program to help them scale up their businesses, deepen their impact and create decent jobs.

Then the panelists shared best practices of the solutions they are leading in their communities. 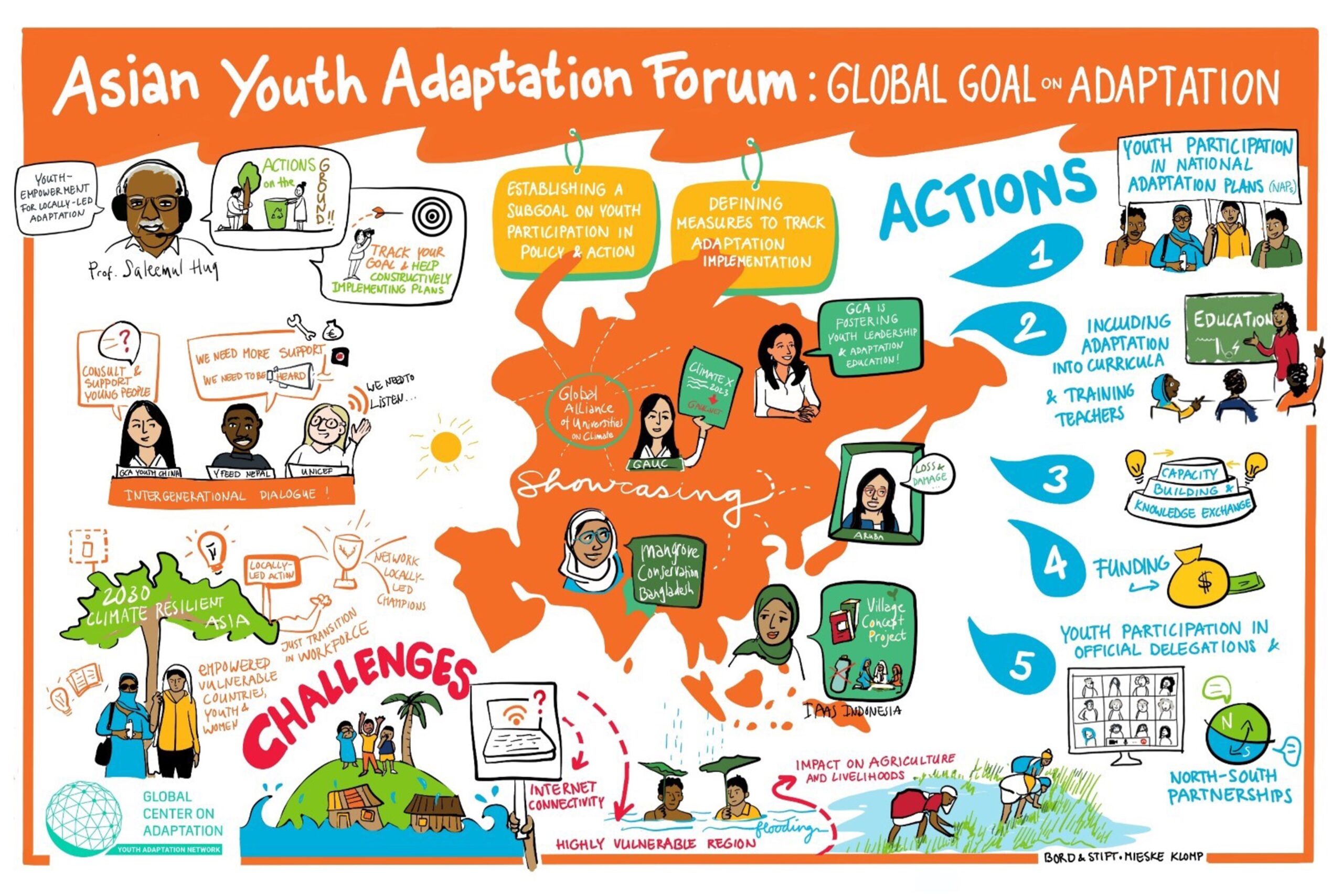 The participants went into breakout rooms to deliberate on what a climate-resilient Asia should look like, and what key actions are needed to make it a reality. Five key actions that were identified are:

Recommendations by young people will be presented to decision-makers at global forums including
GCA’s Africa Adaptation Finance Forum in September and at the African COP27 in Egypt through partnerships with youth climate networks at the regional and international level. In addition, GCA and its Youth Advisory Panel will launch a publication at Pre-COP27 showcasing youth-led adaptation case studies and the key messages and recommendations collected during the Regional Youth Adaptation Forums regarding the achievement of the Global Goal on Adaptation.