G lasgow, United Kingdom, 2 November 2021 – Today, African Leaders, speaking during the Africa Adaptation Acceleration Summit at COP26, the largest ever gathering of global leaders focused on climate adaptation, called for the rest of the world to step up their support to help the continent adapt to the adverse effects of climate change.

President Félix Tshisekedi, President of the Democratic Republic of Congo and Chairperson of the African Union, who chaired the event, praised the ongoing momentum towards mobilizing additional resources to help Africa adapt to the impacts of climate change. He outlined the $6 billion in financial commitments for climate adaptation African countries have put forward in their Nationally Determined Contributions and urged the rest of the world to continue to step up and bring the additional $27 billion a year the continent requires.

President Félix Tshisekedi, President of the Democratic Republic of Congo and Chairperson of the African Union endorsed the Africa Adaptation Acceleration Program (AAAP) as the preferred channel for funding climate adaptation in Africa:
“Adaptation finance flowing to Africa is grossly insufficient compared to the enormous resources needed for it to adapt to climate change. That is why African countries, working with the Global Center on Adaptation and the African Development Bank and other partners, have launched the Africa Adaptation Acceleration Program. The Program is at the heart of Africa’s climate change needs. It is Africa-owned and Africa-led. African nations have endorsed the Program as Africa’s preferred mechanism to deploy adaptation finance for adaptation projects in Africa.”

The Africa Adaptation Acceleration Program requires $12.5 billion by 2025 in addition to the $12.5 billion already committed by the African Development Bank. The funds will be spent on climate-proofing, creating new jobs and modernising key economic sectors and to support upstream efforts to integrate climate adaptation investments at the national level.

Patrick Verkooijen, CEO of Global Center on Adaptation, moderating the Summit noted the urgent need for accelerated adaptation action across the continent:
“COP26 must deliver on the promises of Paris. We are failing and we are failing Africa. We must bring more ambition and more finance to help Africa adapt to the pace of a climate emergency devastating the continent with increasingly serious consequences for the world’s poorest and most vulnerable. Africa has a plan and the world must listen. The world must join the hands of the African leaders that have said loud and clear: we will make Africa adapted to climate change.”

Akinwumi Adesina, President of the African Development Bank Group remarked:
“We must deliver climate adaptation at scale. We must build climate resilience. The African Adaptation Acceleration Program will help achieve this for Africa. There is the fierce urgency of now, to quote former U.S. President Barack Obama! Let us get started with the $12.5 billion. It is a down payment for a more resilient future. With that Africa can breathe.”

António Guterres, Secretary-General of the United Nations said:
“We must do more to protect vulnerable communities from the clear and present dangers of climate change. Over the last decade, nearly 4 billion people suffered climate-related disasters. That devastation will only grow. But adaptation works. Early warning systems save lives. Climate-smart agriculture and infrastructure save jobs. All donors must allocate half their climate finance to adaptation. Public and multilateral development banks should start as soon as possible.”

During the event, Alok Sharma, President for COP26, announced new funding from the UK to support African governments to roll-out critical adaptation projects so at-risk communities can adapt to the impact of extreme weather and changing climates.
“Despite the energy and the commitment I have seen in many African nations to adapt, a gulf has existed between the needs and international response and that is why adaptation has been central to the UK’s COP26 presidency […] The UK is offering the African Development Bank a guarantee expected to unlock $2 billion of new financing – and half of this will help countries adapt to climate impacts, supporting the vital work of the AAAP.”

The British Government also announced £20 million to the Africa Adaptation Acceleration Program to support African countries in designing and implementing transformational adaptation of their economies and post-COVID recovery development paths.

United States Secretary of State, Antony Blinken, also announced new funding for climate adaptation from the United States government:
“The President will work with our congress to dedicate $3 billion annually in adaptation finance by the year 2024. This is the largest commitment ever made by the US to reduce the impact of climate change in those most endangered by it around the world. As part of the rollout that we are doing, we will be providing support to the Africa Adaptation Initiative directly. This will ensure effective implementation of the accelerator program. We will continue our work with the AU Commission and other African partners to shape and implement climate-smart policies across the continent.”

Kristalina Georgieva, Managing Director of the International Monetary Fund said:
“The enormous pressure for adaptation, particularly in Africa, is caused by inadequate mitigation—so we must all do more to stabilize our climate. At the same time it is critical that vulnerable countries step up adaptation efforts, with support from the international community. Advanced economies must meet or exceed their commitment to provide $100 billion a year in climate finance, including for adaptation.”

Ngozi Okonjo-Iweala, Director-General of the World Trade Organization said:
“Adaptation for Africa must be a priority for the international community. This region contributes the least to emissions but suffers the most. Trade can help in many ways: food security in the face of climate threats, access to adaptation technologies, and synergies in Aid for Trade and climate finance. The blueprint for adaptation actions for the African continent set out by the GCA is vitally important, and trade and the WTO can help realize these goals.” 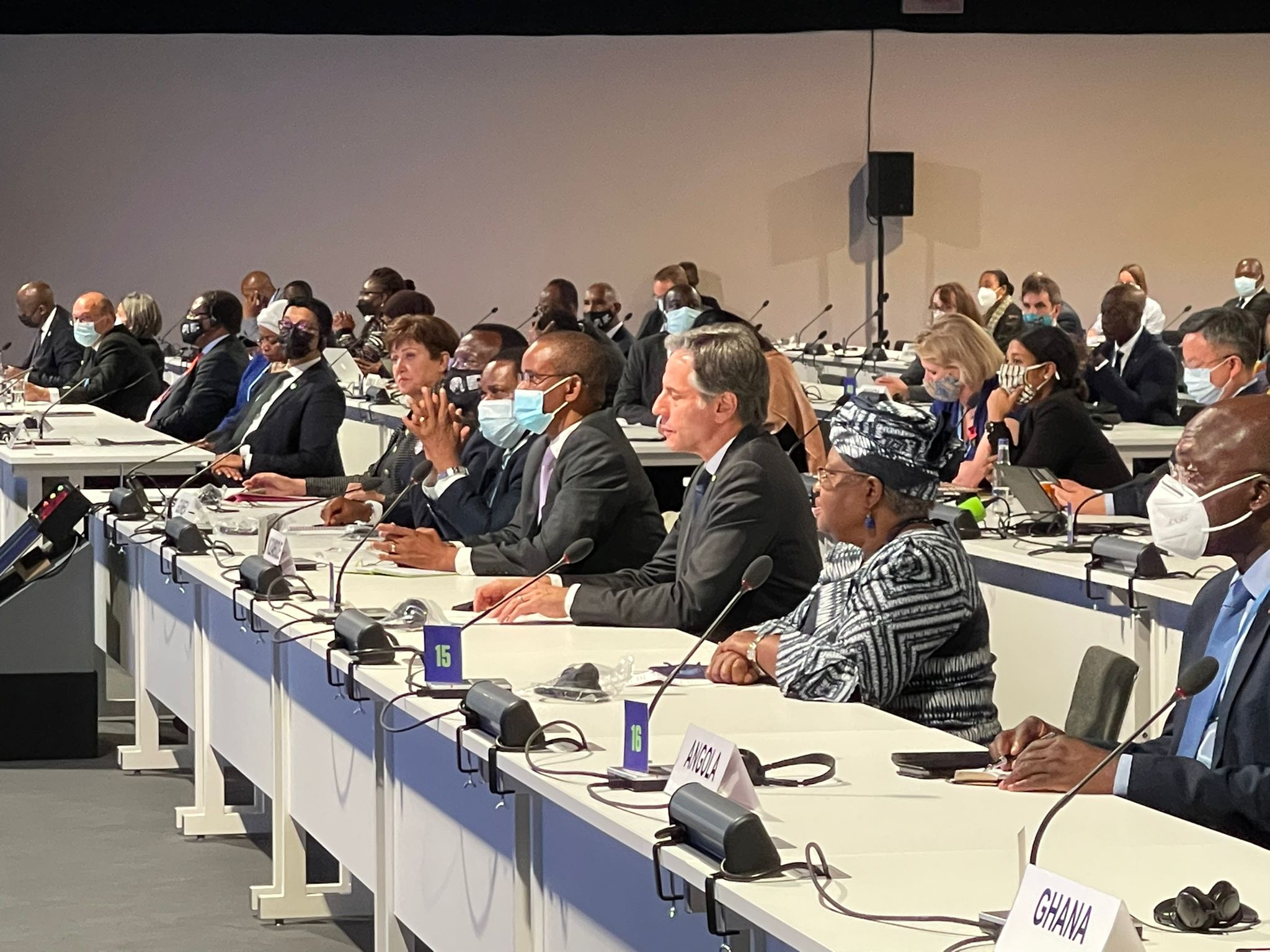 Notes to Editors:
About the Global Center on Adaptation
The Global Center on Adaptation (GCA) is an international organization which works as a solutions broker to accelerate action and support for adaptation solutions, from the international to the local, in partnership with the public and private sector, to ensure we learn from each other and work together for a climate resilient future. Founded in 2018, the GCA is hosted by the Netherlands, working from its headquarters in Rotterdam with a knowledge and research hub based in Groningen. The GCA has a worldwide network of regional offices in Abidjan, Ivory Coast; Dhaka, Bangladesh and Beijing, China. Through this evolving network of offices and global and regional GCA teams, the organization engages in high-level policy activities, new research contributions, communications, and technical assistance to governments and the private sector.

About the Africa Adaptation Acceleration Program
As the global solutions broker on adaptation and resilience, the Global Center on Adaptation (GCA) has joined forces with the African Development Bank to create the Africa Adaptation Acceleration Program (AAAP) focusing on bringing four critical areas for adaptation action to scale in partnership with African countries and partners. The four critical areas of Climate Smart Digital Technologies for Agriculture and Food Security; African Infrastructure Resilience Accelerator; Empowering Youth for Entrepreneurship and Job Creation in Climate Adaptation and Resilience and Innovative Financial Initiatives for Africa will help address the nexus of climate change, COVID-19, and the economy and will support African countries in designing and implementing transformational adaptation of their economies and post-COVID recovery development paths. AAAP aims to mobilize $25 billion to support Africa’s adaptation plans over five years ($5 billion per year). The AfDB has already committed half of the total, $12.5 billion by 2025. The program has been endorsed by President Tshisekedi, Chair of the African Union and President Ali Bongo of Gabon, the African Union Champion for Adaptation.

About State and Trends in Adaptation in Africa Report 2021
The GCA’s 2021 State and Trends in Adaptation in Africa report presents the most comprehensive overview of the present and future prospects of the African continent in the light of climate change. It is also a blueprint for how individuals and institutions in the African and international policy space can design, finance, and implement adaptation plans to best protect the lives and livelihoods of hundreds of millions of African people. Published ahead of COP26 in Glasgow, the report is an evidence-based advocacy tool to put adaptation and resilience in Africa higher on the agenda nationally and internationally using the report’s actionable policy recommendations. As adaptation is scaled up in response to the challenge of climate change, the report is expected to influence the design of projects and programs, including those supported by the African Adaptation Acceleration Program.

To read the report please go to https://gca.org/reports/state-and-trends-in-adaptation-report-2021/

Chair of African Union: We are tired of waiting — Africa must be a priority for COP26

Global Leaders Call: No Success at COP26 without a fair deal for Africa