The Role of Domestic Budgets in Financing Climate Change Adaptation 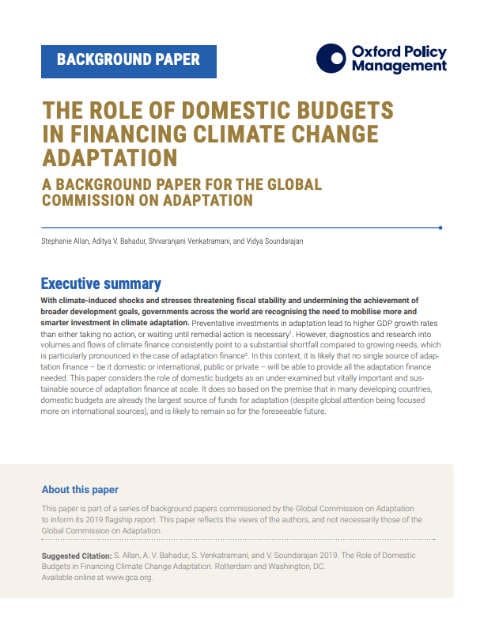 With climate-induced shocks and stresses threatening fiscal stability and undermining the achievement of broader development goals, governments across the world are recognising the need to mobilise more and smarter investment in climate adaptation. Preventative investments in adaptation lead to higher GDP growth rates than either taking no action, or waiting until remedial action is necessary. However, diagnostics and research into volumes and flows of climate finance consistently point to a substantial shortfall compared to growing needs, which is particularly pronounced in the case of adaptation finance. In this context, it is likely that no single source of adaptation finance – be it domestic or international, public or private – will be able to provide all the adaptation finance needed. This paper considers the role of domestic budgets as an under-examined but vitally important and sustainable source of adaptation finance at scale. It does so based on the premise that in many developing countries, domestic budgets are already the largest source of funds for adaptation (despite global attention being focused more on international sources), and is likely to remain so for the foreseeable future.