A lecture hall at the University of Groningen in a building that formerly housed the stock exchange, yesterday provided the stage for an inspiring exchange of ideas on climate change adaptation between visionary world leaders and young climate advocates.

The “High-Level Dialogue with Youth: Accelerating Adaptation in a Climate Emergency,” organized by the Global Center on Adaptation (GCA) and the University of Groningen, brought together influential actors from all walks of life who share one urgent concern: seeking solutions to tackle the global climate emergency alongside young people.

From keynote speaker H.E. Ban Ki-moon, 8th Secretary General of the United Nations and Chair of the Board of GCA to Arjen Robben, famous former Bayern München football star and GCA Ambassador and a panel of University of Groningen students from all over the world, participants in the dialogue included committed young leaders, academics, development experts, government leaders and influencers.

The dialogue, presided by CEO of GCA Prof. Dr. Patrick Verkooijen, centered on the intensification of climate change and the moral injustice of the climate emergency, in which poor, vulnerable nations bear the brunt of the crisis while developed nations fail to act with the required urgency.

Verkooijen explained that while it took the planet 150 years to warm one degree, the most recent IPCC report warns that in the next decade global warming could reach 1.5 degrees.

“If you have already been alarmed at the type of weather extremes we have been experiencing, fasten your seatbelt, much more is coming. This reality demands a major reorientation of how we tackle climate change. We now have to fight the climate war on two fronts: we have to reduce our carbon footprint, while at the same time we adapt to our changing climate,” said Verkooijen.

H.E. Mohamed Nasheed, former President of the Maldives, an island archipelago that could disappear by the end of the century if climate change continues at its current pace, said: “The West, the rich countries are not listening. One of the reasons, I think, is because we are using the wrong language. We are using the anti-slavery, anti-imperialism, anti-colonialism language, and it’s very heavy…But blaming each other is not going to achieve much. I think it is time that we stop pointing a finger at each other, it is time that we join our hands together.” 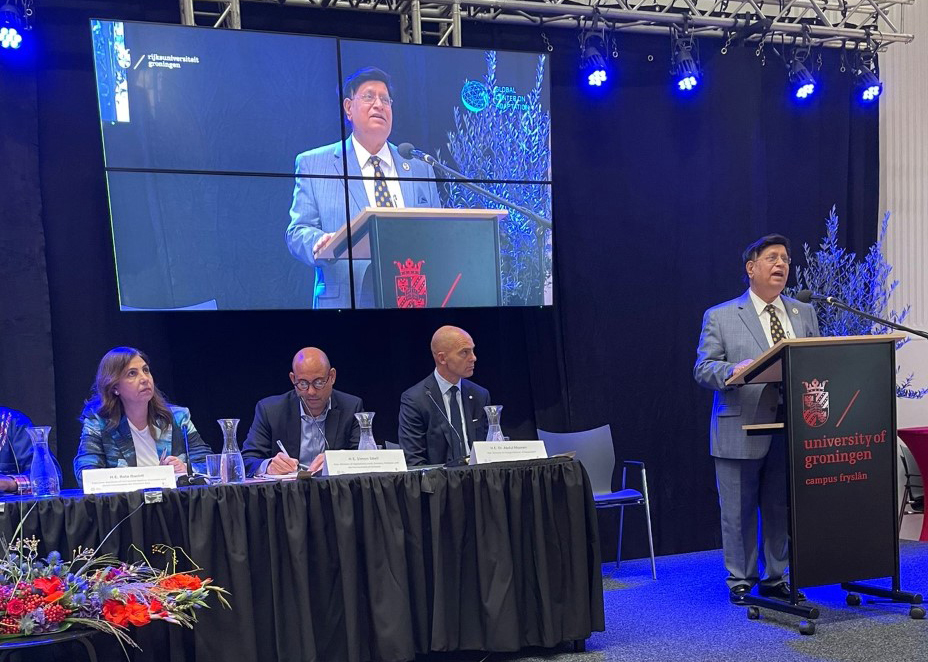 However, there is a way out of the impending climate crisis, and it involves climate adaptation, mitigation, and young people.

“I believe there’s no better place to find bold solutions than inside the minds of the talented young women and men who make up the student bodies of this and other universities and schools across Europe and around the world,” said Ban Ki-moon, who received an honorary doctorate from the University of Groningen.

As noted by the 8th Secretary General in his reply to a student’s question, education is crucial to overcoming the climate emergency.

“Students, from when they begin primary school, they have to be taught the necessity and importance of human beings living together, wisely, harmoniously, with our nature. That has to be in your blood, in your mindset, from a young age. It may be too late if we want to educate ministers or presidents because they are more focused on economic development. Can we ensure economic development without paying attention to what is happening these days? Nothing can be done if we go against nature,” he said.

Julia Gabriela Strack Díaz, a Bolivian student at the University of Groningen, echoed Ban Ki-moon’s sentiment on the importance of living in harmony with nature.

“I believe there’s a lot to be learned from the Andean, Amazonian cosmovision regarding how we interact with our nature,” she said, sharing the Quechuan translation for “a territory that gives in you the desire to live and to enjoy.”

“You achieve this [feeling] by having a reciprocal and loving relationship with nature. We are failing as a society to uphold this. Scarcity is increasing all over the world, lakes are disappearing, forests are burning down, and with them, they take traditional ways of living with and from nature,” said Strack Díaz, adding that we must learn from traditional communities how to practice methods such as water harvesting and crop diversity.

Football star Arjen Robben brought the discussion close to home, highlighting that the climate crisis affects every human being, including athletes and anyone who enjoys practicing sports to stay healthy in body and mind, particularly during the Covid pandemic.

“We may hear the news about climate impacts in faraway places and think that it’s a distant problem. But it affects every single one of us and we are beginning to witness its effects in Europe and the Netherlands, struck by massive flooding and forest fires this summer and also here in Groningen, where we suffer from droughts and heatwaves,” said the GCA Sports and Climate Ambassador.

Youth in Climate Adaptation: Moving towards the Digitalization of Agriculture