I n an effort to provide a much-needed platform for youth around the world to lead the path to adaptation, GCA’s Youth Adaptation Network recently launched the first in a series of virtual Youth Adaptation Dialogues that will take place monthly until December 2021.

The event, held on June 23rd, was co-organized by GCA and the International Centre for Climate Change and Development (ICCCAD), and explored the role of universities and students in locally-led adaptation. It provided an opportunity for young leaders and activists to connect, share best practices and learn from each other and from seasoned experts such as keynote speaker Dr. Huq, Director of ICCCAD and GCA’s Senior Advisor of Locally-led Action and Dr. Aditya V. Bahadur, Principal Researcher of Human Settlements at the International Institute for Environment and Development (IIED).

GCA Youth Leadership Program Lead Adriana Valenzuela, who organized and moderated the activity, said the dialogue’s topic was chosen because adaptation must respond to local needs and realities.

“Every person can be an agent of change in their community and through this event we wanted to showcase adaptation initiatives and motivate youth to lead such initiatives,” she said, adding that the activity provided a remarkable opportunity for an intergenerational exchange between experts and youth.

Dr. Huq opened the dialogue by defining locally-led action and tracing its origins to “community-based adaptation,” practiced in the early 2000’s with a focus on the world’s most vulnerable communities threatened by climate change. This modality evolved into locally-based adaptation when it expanded its scope from these communities to all stakeholders, such as government officials, schools, and actors at the local level, including youth, Huq explained.

“We want to identify them [young leaders], we want to talk to them, we want to find ways in which we can network with them, dialogue with them, see if we can help each other,” said Huq.

The principles include empowering those who are worst affected by climate impacts by devolving decision-making to the local level, addressing inequalities faced by women, youth, children and other vulnerable and marginalized ethnic groups, and providing long-term funding that can be accessed easily so that communities may implement adaptation plans.

“The central purpose of these principles is to make sure that those who are on the frontlines of climate risk – the poor and vulnerable communities of the Global South – we want to ensure that those people have the power, the agency, the money and the capacity to lead processes of adaptation as opposed to being passive recipients,” Bahadur said.

His presentation was followed by case studies presented by young leaders from Brazil, Uganda and the Netherlands. 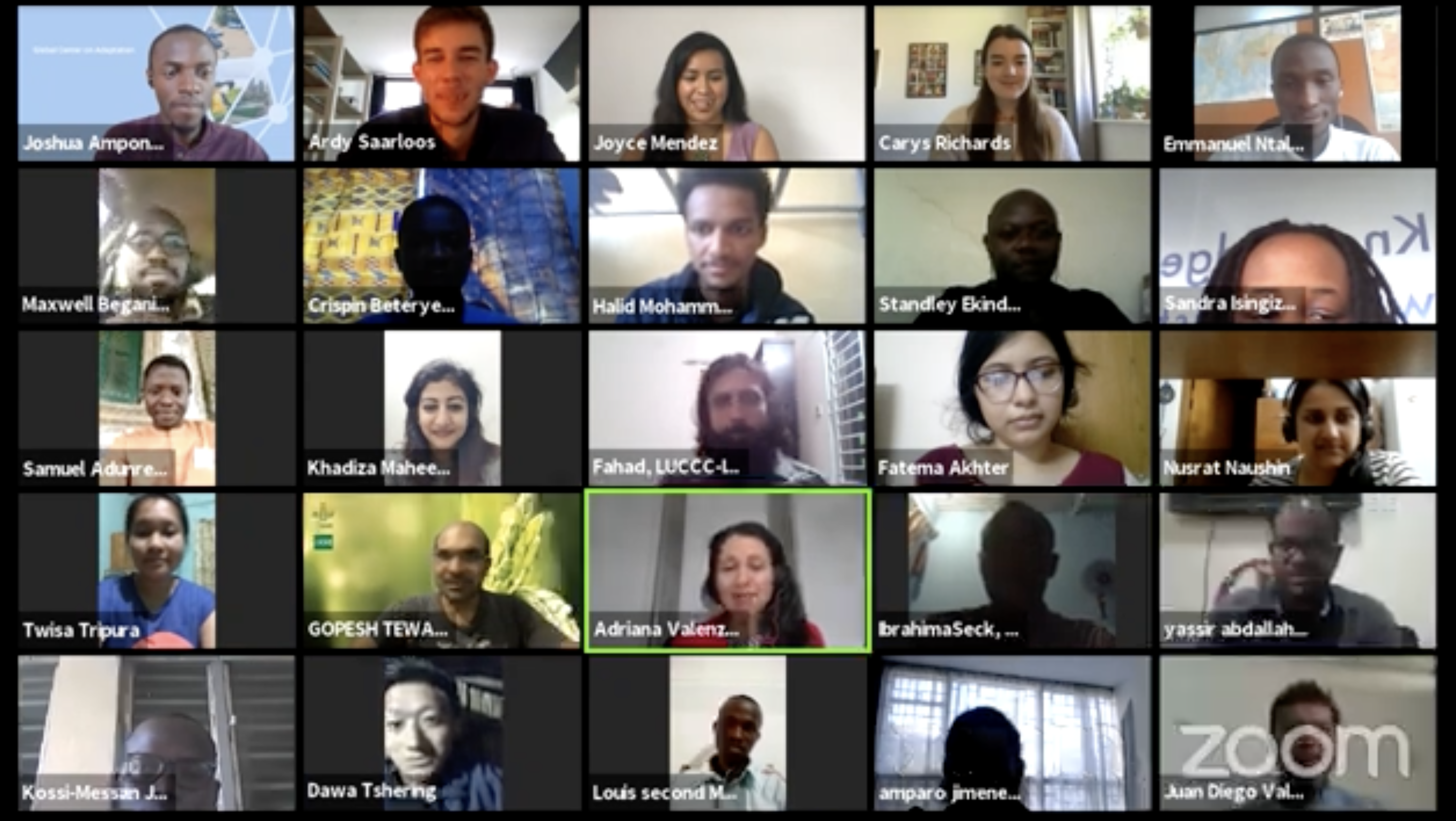 Young leader Joyce Mendez, MSc in Sustainability and Adaptation Planning, showcased the experience of launching the Moema Viezzer Environmental Educative Observatory in Foz de Iguaçu, Brazil, near the borders with Paraguay and Argentina. The observatory, part of the Federal University of Latin American Integration (UNILA), was founded by youth and professors alongside the community, with the purpose of obtaining local knowledge to shape public policy that supports adaptation, mitigation and biodiversity.

Ardy Saarloos, currently undertaking an MSc in Climate Studies at Wageningen University in the Netherlands, delivered a presentation on the Village Concept Projects (VCPs) of the International Association of Students in Agricultural and Related Sciences (IAAS), a network of approximately 10,000 students in more than 50 member countries. The VCPs are a set of large-scale development projects in rural villages around the world that connect agriculture students with local farmers.

“We believe that collaboration is crucial in locally-led climate adaptation. By bringing students in touch with farmers, we hope to contribute to the Sustainable Development Goals,” Saarloos said.

Emmanuel Ntale, founder of the Climate Change Association of Makerere University in Uganda, spoke on behalf of Gordon Mwesigwa Yofesi, Coordinator of Community-based Internship and Research Activities at Makerere University. He highlighted the different student-led climate activities taking place at the university, such as annual climate change youth bootcamps, student internships, field-based learning and research, and climate change education in primary and secondary schools across Uganda.

The case studies were followed by a space for questions and answers and dialogue among participants.

Youth in Climate Adaptation: Moving towards the Digitalization of Agriculture
6 ground-breaking ways Rotterdam is setting trends in urban adaptation

These youth groups are fighting climate change around the world. How can we help them thrive?