Disasters like Cyclone Ampham are here to stay. They show how important it is to adapt

The Earth Institute at Columbia University

Global warming due to climate change will cause more severe and frequent cyclones. To protect vulnerable regions, climate adaptation and proactive disaster preparedness must be prioritized with urgency.

S uper cyclone Amphan (alluding to the Thai word for “sky”) developed in the Bay of Bengal as the strongest cyclone ever to be recorded in the region, comparable to a Category 5 hurricane. On the evening of May 20th, Amphan made landfall in the Indian state of Bengal as a Category 2 cyclone, first ripping through the Sundarbans delta, and then proceeding north and east to rural Bengal and the capital city of Kolkata. For a region that is already strained by the impacts of COVID-19, the cyclone is an unprecedented environmental and social disaster, and provides a multi-faceted case study showing how urgently the world needs to begin adapting to the changing climate. By building resilience into our infrastructure and communities, we can reduce the damages from natural disasters and recover from shocks more easily.

Super cyclones have wind speeds that exceed 220 km per hour (137 mph). They are characterized by strong winds that cause extensive physical damage, and heavy rainfall and storm surges that cause flooding. The coastlines of the Indian states of Odisha and West Bengal, and the country of Bangladesh are well acquainted with tropical cyclones. Framing the Bay of Bengal, the high sea surface temperatures of the region trigger strong cyclones, while the shallow, concave bay creates catastrophic storm surges when winds funnel water toward the land, according to the BBC.

The mangrove forests of the Sundarbans delta—designated a UNESCO World Heritage site—play an important part in protecting the Bengal and Bangladesh coastline from the crushing blow of cyclones, acting like naturally occurring “green infrastructure.” Large sections of the forest have been cleared in recent decades for the development of roads, embankments, and fisheries. Cyclone Amphan is another back-breaking hit to an ecosystem that supports about 4 million people, shelters extensive native biodiversity (including the Bengal tiger and the Olive Ridley turtle) and is as critical and endangered as the Amazon. 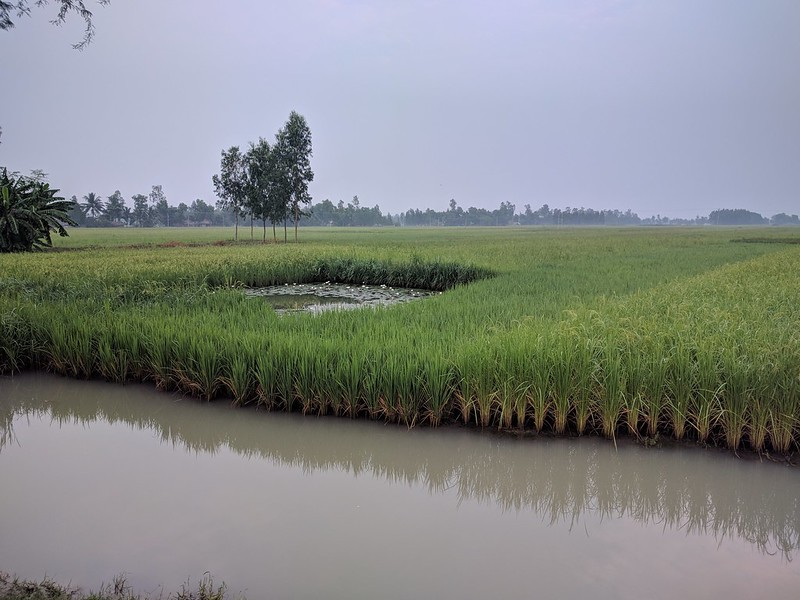 Mangrove forests of the Sundarbans delta play an important part in protecting the Bengal and Bangladesh coastline from cyclones. Photo by Ankur Panchbudhe/ Flickr

Routine precautionary measures were taken in the days leading up to Amphan’s descent, with over 150,000 people evacuated from coastal Odisha and about 500,000 from coastal Bengal. In denser urban regions like Kolkata, power supply was deactivated for most of the city as a precaution against electric fires and accidents. Despite these efforts, the cyclone brought widespread destruction of homes, urban infrastructure, and physical barriers that prevent saltwater inflow into arable land, crops, and livestock. Coordinated relief and repair is urgently required, not only to restore the mangroves, but also to rehabilitate affected communities with direct funds to rebuild resilient homes, buy food and supplies, and find a path back to their livelihoods—all whilst upholding social distancing norms amidst the ongoing pandemic.

The overlapping disasters of COVID-19 and the cyclone, coupled with the fact that the communities on the frontline are some of the world’s poorest and most densely populated, lead to the creation of a complex disaster zone that has no one-size-fits-all solution. It also reinforces the fact that our climate crisis cannot be viewed in isolation; climate action planning must be integrated in every critical socio-economic sector, be it agriculture, jobs, mobility, energy, or public health.

Trends indicate that India could be on track to achieve its goals under the Paris Agreement: to reduce CO2 emissions intensity by 33-35 percent from 2005 levels and to achieve 40 percent non-fossil fuel electric power capacity, both by 2030. While efforts on the climate mitigation front have seen traction, climate adaptation and proactive disaster preparedness must be prioritized with urgency, particularly for low lying vulnerable regions such as the Sundarbans. Scientists have found that atmospheric warming due to climate change is linked to higher frequency and intensity of cyclones. Additionally, sea level rise exacerbates storm surge, particularly if heavy rainfall coincides with a high tide, thereby resulting in catastrophic flooding. These problems, therefore, are here to stay.

India’s National Disaster Management Authority and the National Disaster Response Force have drawn lessons from experiences in recent decades, such as the super cyclone of Odisha in 1999 and Cyclone Phailin in 2013, and have improved their use of climate models and predictive data. However, comprehensive climate adaptation planning must urgently consider the proactive development of resilient infrastructure, particularly in key sectors such as energy and transportation. While power supply was restored in some parts of Bengal within a day of the cyclone‘s landfall, several neighborhoods of Kolkata and the North and South 24 Parganas districts continued to struggle without power up to five days later.

How to boost infrastructure resilience

There are several ways to boost infrastructure resilience. Energy resilience can be enhanced through the development of distributed renewable power such as rooftop solar installations. Flooding can be addressed partially through the widespread deployment of green infrastructure, while preventing the development of grey infrastructure on wetlands. Restoring and stringently protecting the mangrove forests of the Sundarbans is critical not only for ecological health, but also to restore resilience against sea level rise and future cyclones.

From a social perspective, it is evident that the poorest communities in the Sundarbans and rural Bengal have borne the brunt of Cyclone Amphan—they have lost their homes, and their fields are inundated with saltwater and are rendered useless in the near future. This is mirrored by natural disasters around the world. Any future climate adaptation strategy needs to account for the material needs of the most vulnerable communities, prioritizing the building of a social safety net that will enable them to resume their livelihoods and continue to live with dignity. Moreover, among the various stakeholders that build and carry community resilience, grassroots organizations and volunteer networks understand the local community and show up in solidarity at the hour of need, as disasters around the world have shown time and again. In Bengal, organic volunteer networks like the Quarantined Student Youth Network and the Bengal Relief Collective, and grassroots groups like Mukti are among several groups that have rapidly mobilized resources and deployed volunteers on the ground to provide aid to affected communities. While climate preparedness planning must involve all levels of government, representation from grassroots and community organizations is critical to ensure that the process meaningfully represents the interests of all citizens.

Now is the time for investors to act for a green recovery, says UN envoy
Why climate adaptation plans in Latin America are more important than ever

The Earth Institute at Columbia University