This map shows where Americans will migrate once sea levels rise

As climate change makes areas of the US uninhabitable, people are likely to migrate inland into so-called ‘climate havens’. To help authorities prepare, researchers have drawn up a map of where they predict those affected will move.

W hen Hurricanes Katrina and Rita swept through Louisiana in 2005, cities like Houston, Dallas, and Baton Rouge took in hundreds of thousands of displaced residents—many of whom eventually stayed in those cities a year later. Where evacuees have moved since hasn’t been closely tracked, but data from those initial relocations are helping researchers predict how sea level rise might drive migration patterns in the future.

Climate experts expect some 13 million coastal residents in the U.S. to be displaced by the end of this century. A new PLOS One study gives some indication of where climate migrants might go.

“A lot of cities not at risk of sea of level rise will experience the effect of it,” says Bistra Dilkina, a computer scientist at the University of Southern California, who led the study. “This will require an adjustment in terms of the [increased] demand on the cities’ infrastructure.” 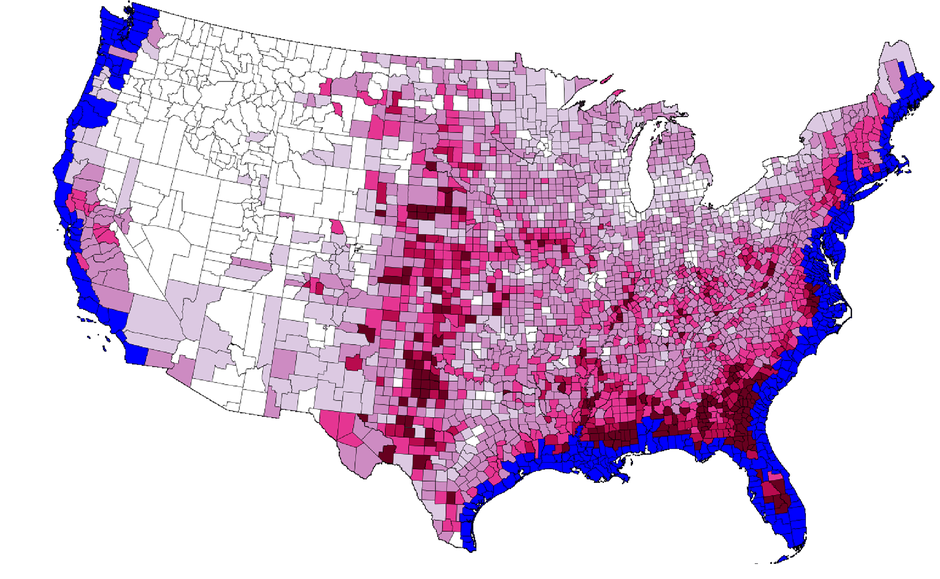 US counties where flooding will displace residents if sea levels rise by six feet by 2100 are in blue. Counties in pink and red will see higher-than-average migration. Image by PLOS One.

Dilkina and her team used migration data from the Internal Revenue Service to analyze how people moved across the U.S. between 2004 and 2014. Movement from seven Katrina and Rita-affected counties to unaffected counties between 2005 and 2006 was categorized as climate-driven migration. Researchers then combined that analysis with National Oceanic and Atmospheric Administration (NOAA) projections on the effects of sea level rise on coastal counties, and trained a machine-learning model to predict where coastal populations will move when forced to leave their homes—and how that, in turn, affects the migration of non-coastal residents.

Planning for the worst-case scenario

In the worst-case scenario, in which sea levels rise by six feet by 2100, the resulting map shows portions of almost all counties on the East and West Coasts, and along the Gulf of Mexico, under water. It also shows that cities closest to the flood-prone areas, and that aren’t typically attractive destinations for newcomers, could see a higher-than-average influx of migrants. In Florida, for example, that means people mayincreasingly move to the shrinking core of the peninsula as the coastlines disappear into the ocean. Demographer Mathew Hauer, whose climate migration research was a building block for Dikina’s, explained in Audubon Magazine that people tend to move to familiar places nearby, where they might already have friends, family, or some other support network. People may also flock to major urban centers like Dallas and Houston, which the model predicts will absorb the most migrants, and drive up the pace of urbanization. 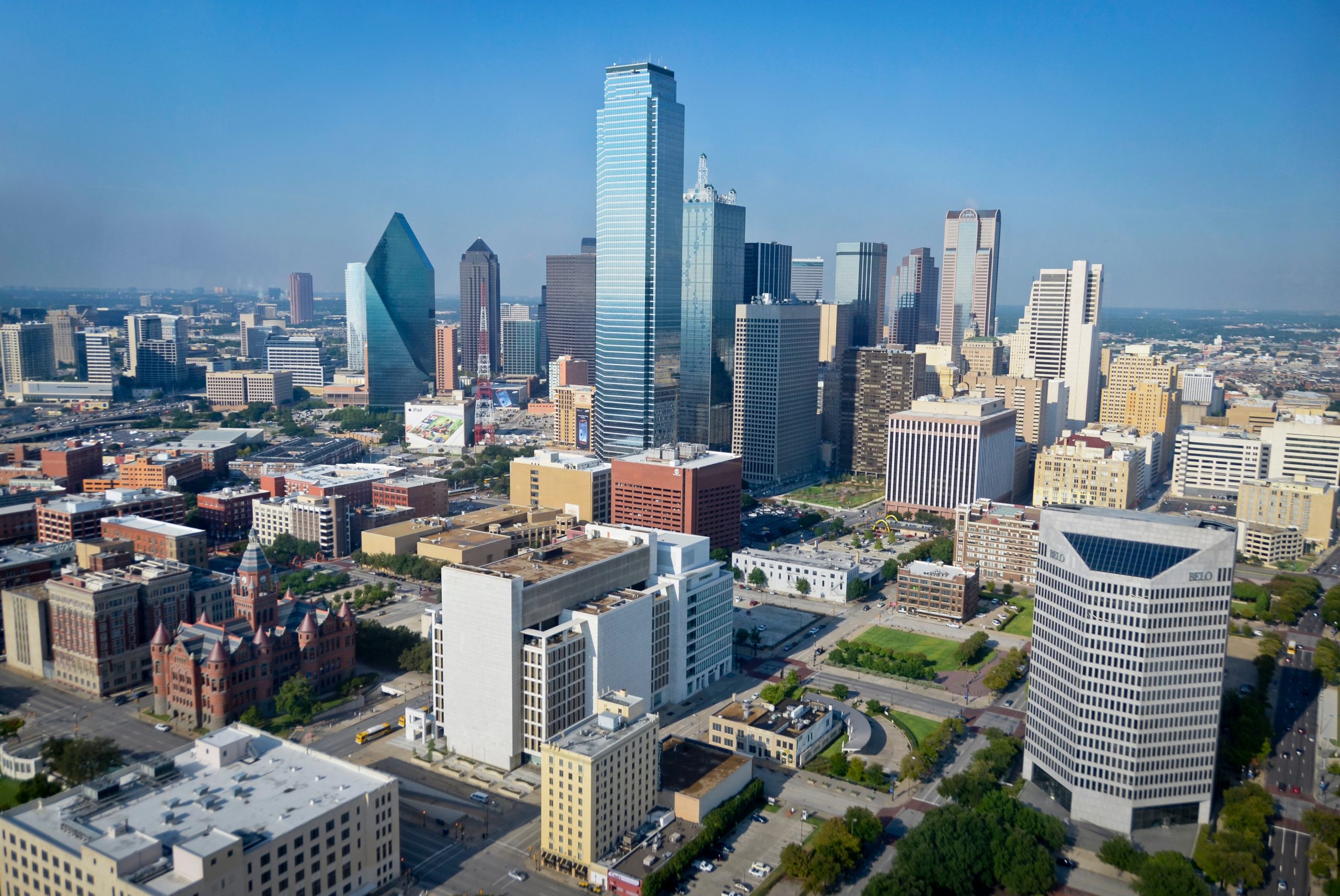 In the short to medium term, cities on the receiving end will likely face a housing crunch, according to Jesse Keenan, a climate adaptation expert at Harvard University who was not involved in the study. He points to the 2018 wildfire that displaced some 50,000 residents in and around the city of Paradise, California.“It’s increased the property values of neighboring towns,” he says. One such town is Chico,which became the top refuge destination and turned into a boomtown almost overnight. By the end of that year, home sales doubled and housing prices jumped 21 percent, compared to December 2017.

In the long term, “that’s going to lead to displacement, housing pressure, and probably even to homelessness among people who are being indirectly forced out by the people moving in,” Keenan says—a phenomenon he calls “climate gentrification.”

Those with the means to move will likely relocate to another big city away from the coast, in search of comparable or better economic opportunities, according to the latest study. Many may end up moving to the suburbs in the Midwest, where the model shows a larger-than-average influx of migrants compared to historic trends.

Dilkina is careful to describe the study as only an “approximation” of how sea level change might drive migration patterns, not a precise picture of where people will actually move. “There’s still a lot of need for understanding different drivers and externalities,” she says, adding that her team will be presenting their results at various meetings and conferences with other academics who may want to collaborate. “We are setting up a model to be improved as we go.”

For one thing, sea level rise is just one effect of climate change. Heat waves will drive people north—and could make make cities like Duluth and Buffalo “climate havens.” Urban flooding will reshuffle populations within a city. And extreme storms will move people in yet other ways. Meanwhile, as in Paradise, “forest fires are going to have dramatic effects on the West Coast, including the Pacific Northwest,” says Keenan. “All of those things are changing land economics, housing economics, and public finance.” 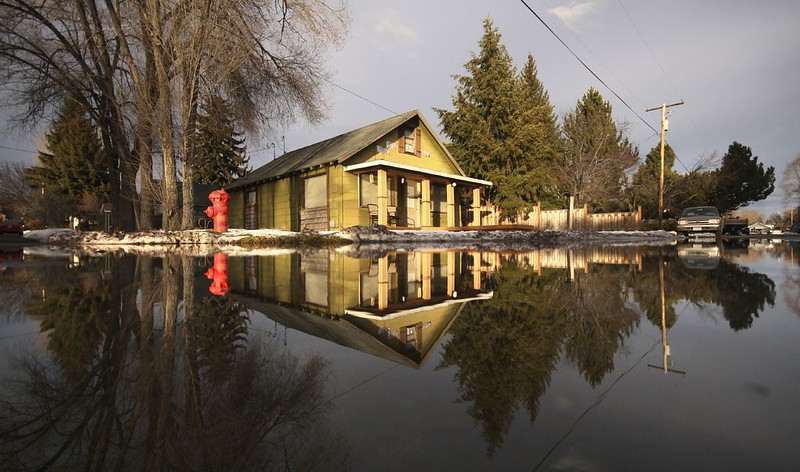 Florida’s coastline is disappearing into the ocean. Photo by Jo Munday/ Flickr

Whether researchers can paint a precise picture of future migration patterns will require better—and more explicit—metrics for measuring how and why people move, and a better understanding of social behavior overall, says Keenan. Currently, migration data is both delayed and indirectly collected via proxies like Federal Emergency Management (FEMA) assistance applications and address changes submitted to the IRS and the post office.

Precision aside, though, Keenan thinks the value of this kind of study lies in the messaging. The map presents a “minimal threshold of the amount of people that would potentially be on the move,” he says. Socioeconomic factors—where companies create employment opportunities, who has the means to move, and how racial discrimination keeps people out, for example—will also play a role in dictating how many people move, and to where.