T o turn ideas into adaptation action in one of the world’s most climate vulnerable regions: Africa, the Global Center on Adaptation (GCA) and the United Cities and Local Governments of Africa (UCLG Africa) signed a Memorandum of Understanding (MoU) against the backdrop of COP26 in Glasgow, Scotland.

The new agreement, signed on 9th November, will facilitate and strengthen collaboration between GCA and UCLG Africa, the leading umbrella organization for African local governments, to support the urgent scale-up of locally-led adaptation throughout a continent that has the fastest urbanization rate in the world. In Sub-Saharan Africa, about 40 percent of the population lives in urban areas, up from 22 percent in 1980.

The African continent is disproportionately threatened by heatwaves, flooding and drought, and low-lying coastal areas, where about half of African settlements with 1-5 million inhabitants are located, have specific climate risks due to sea level rise and increased flood frequency, as stated in GCA’s flagship report State and Trends in Adaptation 2021, focused on the African continent. 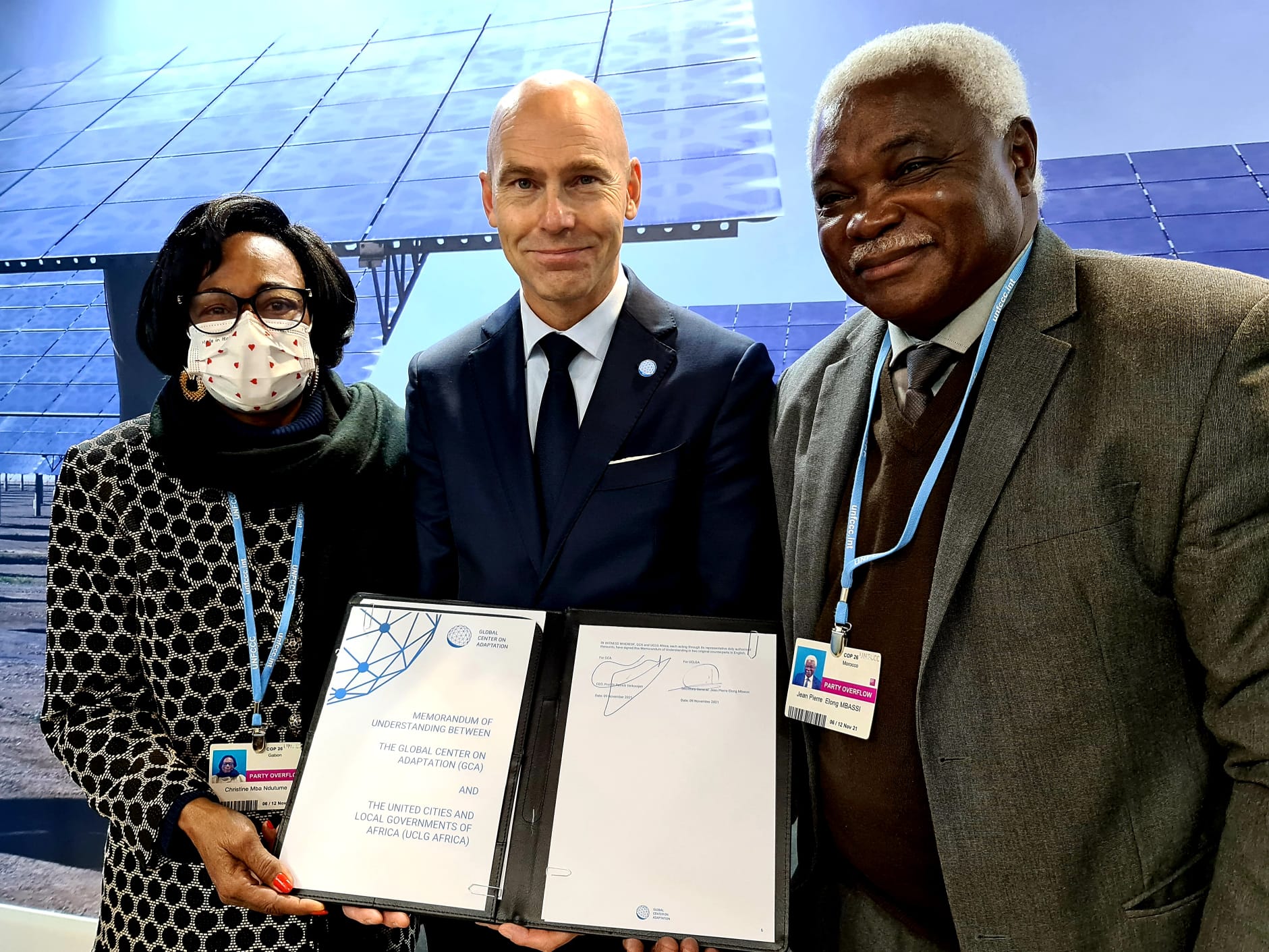 The Africa-led Africa Adaptation Acceleration Program (AAAP), developed jointly by GCA and the African Development Bank (AfDB), aims to mobilize $25 billion for adaptation in Africa in the next five years to address the impacts of COVID-19, climate change and the economy.

In line with the AAAP, the new agreement with UCLG Africa will promote the development and implementation of plans and programs to strengthen adaptation and resilience in African cities and territories, which provide unique opportunities for adaptation action because of their early stages of urbanization, particularly in Sub-Saharan Africa, and post-pandemic recovery.

“Working jointly with UCLG Africa, an organization that channels the united voice of local African governments, will enable GCA to deliver the AAAP on the ground in this region where adaptation can no longer be delayed, and immediate action is required,” said Prof. Dr. Patrick Verkooijen, CEO of GCA, who signed the MoU along with Secretary General of UCLG Africa Jean Pierre Elong Mbassi.

The MoU provides a framework for cooperation in three main areas: Programs and Action, Knowledge Acceleration and Advocacy and Agenda Setting.

GCA and UCLG Africa will jointly create platforms and opportunities for peer-to-peer learning for local governments and stakeholders, facilitate partnerships to bolster local government capacity and strengthen the gender approach in climate adaptation.

In terms of knowledge acceleration, the organizations aim to strengthen the framework for the acquisition and reporting of information and data related to resilience and adaptation by cities and local governments. They will also co-create knowledge products such as tool kits and knowledge-sharing platforms for local governments to assist them in identifying good adaptation practices.

Finally, the organizations will work jointly to advocate for early, strong and inclusive adaptation action by subnational and local governments, including through advocacy fora such as a Partnerships Market place for scaling up Locally-led Adaptation. They plan to explore options and barriers to accessing adaptation financing for urban and rural governments, where feasible, through GCA and UCLG Africa’s programs and initiatives and will promote African city leadership at regional and global fora, showcasing the challenges of climate adaptation across African countries and also the solutions ready to be scaled.

GCA will participate in UCLG Africa’s 9th Africities Summit, to be held from 17th to 21st May 2022 in Kisumu, Kenya. The events’ theme is “The Role of Intermediary Cities of Africa in the Implementation of Agenda 2030 of the United Nations and the African Union Agenda 2063.”

About the Global Center on Adaptation
The Global Center on Adaptation (GCA) is an international organization that works as a solutions broker to accelerate, innovate and scale adaptation action worldwide, in partnership with the public and private sector, to work together for a climate resilient future. Founded in 2018, the GCA is hosted by the Netherlands, working from its headquarters in Rotterdam with a knowledge and research hub based in Groningen. The GCA has a worldwide network of regional offices in Abidjan, Ivory Coast; Dhaka, Bangladesh and Beijing, China. Through this evolving network of offices and global and regional GCA teams, the organization engages in high-level policy activities, new research contributions, communications, and technical assistance to governments and the private sector.

UCLG Africa acts to strengthen the capacity of local governments to provide better services to their population, to support and train Local Government Associations, and represent local authorities at the pan-African and international level.