Senegal is on the front lines of the global climate challenge and will play a critical role in leading Africa’s response, Patrick Verkooijen, CEO of the Global Center on Adaptation said in closing remarks in Dakar, after meeting President Macky Sall on Friday.

C utting climate finance risks stoking even bigger conflicts down the line. World Bank data indicates that internal climate migration could reach up to 1 million people in Senegal by 2050. 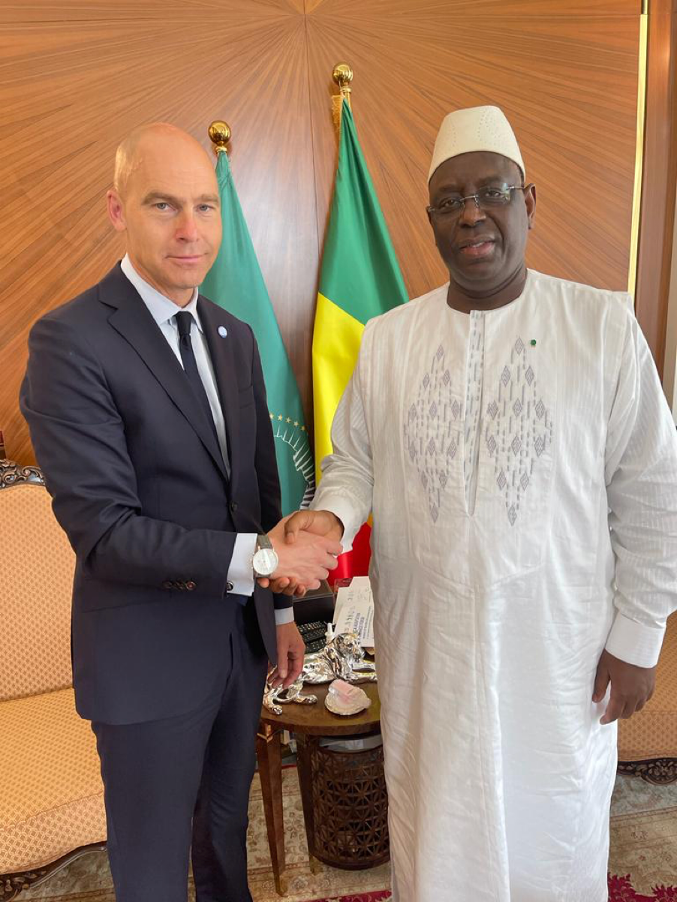 His Excellency, Macky Sall, President of Republic of Senegal and Prof. Dr Patrick Verkooijen, CEO, Global Center on Adaptation (GCA) at the Palace of the Republic in Dakar, Senegal

“Neglecting climate change is immensely shortsighted. Bold adaptation action is the best strategy to address the root cause of other crises. As global food prices soar and shortages loom, the most urgent need is for funds that improve the ability of climate-vulnerable countries to feed themselves,” said President Macky Sall.

“If ever there was a time to strengthen adaptation in Senegal and on the continent, it is now.”

The high-level meeting in Dakar marked a key milestone ahead of the Africa Adaptation Finance Forum, which will be co-convened by President Macky Sall, CEO Patrick Verkooijen, and AfDB President Akinwumi Adesina. The September 5th Leaders Forum in the Netherlands will bring African leaders and global partners together to fulfil the vision of the AAAP and the commitments made in Glasgow of doubling adaptation finance.

“Africa is fighting multiple crises on several fronts, the economic fallout of COVID-19, climate change, and an energy and food emergency, triggered by the war in Ukraine. Senegal has not emerged unscathed: Water related extreme events in Senegal already cost the country over 10% of GDP every year, threatening the country’s position as a regional economic powerhouse.” Verkooijen said.

“Africa must harness climate-resilient solutions quickly and at scale. It is vital for global partners to deliver on their Glasgow pledges on climate finance for Africa.”

Note to Editors
About the Global Center on Adaptation
The Global Center on Adaptation (GCA) is an international organization which works as a solutions broker to accelerate action and support for adaptation solutions, from the international to the local, in partnership with the public and private sector. Founded in 2018, GCA operates from its headquarters in the largest floating office in the world, located in Rotterdam, the Netherlands. GCA has a worldwide network of regional offices in Abidjan, Cote d’Ivoire; Dhaka, Bangladesh and Beijing, China.

Speech by the Global Center on Adaptation CEO at Financing Climate Resilient Infrastructure in Ghana: Ministerial Dialogue and Report Launch

Presentation of Ghana’s Roadmap for Resilient Infrastructure to the President