The Global Center on Adaptation and Peace Boat co-hosted the North American Youth Adaptation Forum on July 15, UN World Youth Skills Day to celebrate the strategic importance of equipping young people with skills for employment, decent work, and creating a more sustainable future for all.

O ne of seven regional Forums, the North American Youth Adaptation Forum aimed at ensuring youth voices from the region are present, heard and considered in the climate change adaptation agenda, including in the review of the Global Goal on Adaptation. The Forum was an official side event to the United Nations High-Level Political Forum on Sustainable Development (HLPF), and focused on SDG4, Quality Education as well as SDG13 Climate Action.

Peace Boat US Director, Ms Emilie McGlone, moderated the event which was held in a hybrid format with seventy-five participants, mainly youth, joining in person at the United Nations Plaza opposite the United Nations headquarters in New York. An additional 40 participants joined the conversations online. The activities in New York began with a networking lunch for the youth while live music from Max Patel and Joseph Pupe soothed the atmosphere. Opening, Ms McGlone spoke about Peace Boat’s commitment to SDG4 through global educational voyages onboard a large passenger ship with the SDGs logo onboard as well as Peace Boat’s Ecoship that will be the future platform for the Peace Boat’s programmes. In her welcoming remarks, Ms Adriana Valenzuela, Thematic Lead for Youth Leadership and Education at the Global Center on Adaptation (GCA), defined the theme of adaptation to climate change as “the capacity to adapt to change,” and highlighted the need to build climate-resilience.” She emphasized the necessity of youth ideas and recommendations in order to raise awareness on adaptation and establish the partnership necessary to make significant change. Prof. Dr. Patrick Verkooijen, CEO of the Global Center on Adaptation said “we need more awareness, we need more education” in his welcome message. 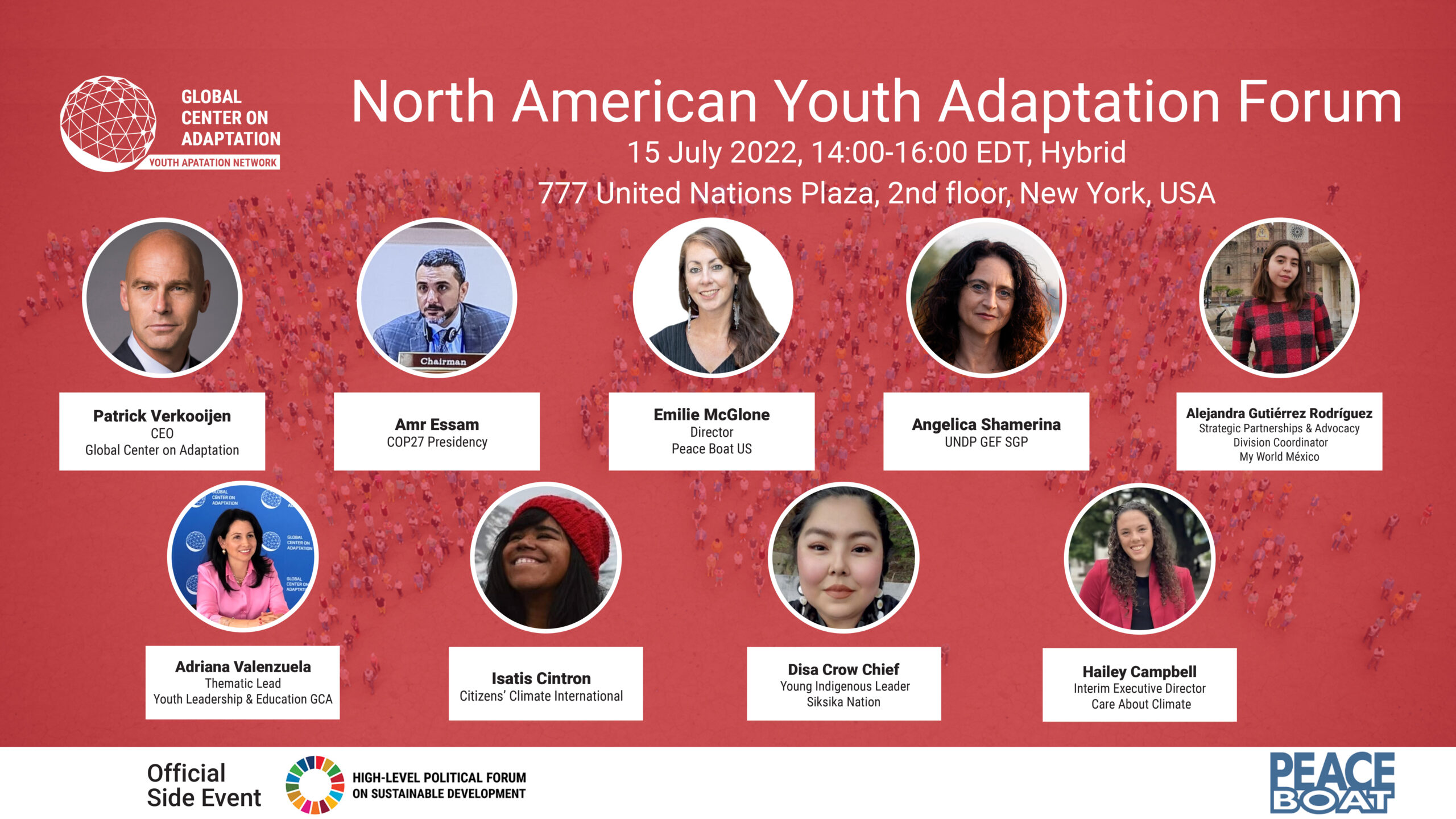 All panelists emphasized the importance of including youth in public policy decision-making as a priority constituent for good governance and not just patronizing them as an interest group. Ms Campbell asked the youth in the audience if they felt accurately represented by their government, and not a single hand was raised. She spoke about her experience of working as a Climate Adaptation Research Analyst for the City and County of Honolulu, Hawai’i, the role of intergenerational participation and the importance of engaging the local community. Ms Isatis Cintron observed how the best teachers of adaptation are community leaders who understand their environment and how to live with it. Ms Kang said she believed there is a need for more holistic education for youth on climate change which includes the societal effects as well as the science.

“The power of community is the greatest capital” – Ms Isatis Cintron, member of US ACE Coalition

Ms Disa Crow Chief co-founded the SevenGen Indigenous Youth Council to mobilize indigenous youth to promote sustainability and equity. She emphasized during the panel how Indigenous communities are disproportionately impacted by climate change, as they are already underfunded and underrepresented but that they also possess Indigenous knowledge which is key for finding solutions. She said it is important to not only listen to and involve Indigenous youth in the discussion but to hire them in projects and campaigns and provide training. The need for training and mentorship was seconded by Ms Shamerina who emphasized the importance of funding for youth projects and noted that youth should even be identified as a priority group for funding. Ms Rodriguez, speaking about her experiences in Mexico, also emphasized the need for funding as well as multi sectoral and intergenerational partnerships. She said that there needed to be active participation of youth in international fora and that youth must be included from the beginning of the development of solutions.


Designing a climate-resilient North America
The panels were followed by an interactive exercise where participants envisioned a climate resilient North America in 2030 and identified what actions could be taken to reach that future. Concrete ideas included a more resilient power grid, citing old power lines as a trigger for wildfires in the intense heat in California. More general ideas included multi-stakeholder participation, funding for youth initiatives, intergenerational partnerships, education and training for participation and including Indigenous voices and honoring traditional knowledge. The forum closed with remarks from Mr Luis Elizondo Belden of the Permanent Mission of Mexico to the UN who spoke about the importance of partnerships across countries, governments, civil society, and business and a video message from Mr Amr Essam, representative of the COP27 Presidency who emphasized the important role of youth at COP27 in Sharm El-Sheikh.

The recommendations of the GCA regional Forums including the North American Youth Adaptation Forum will be compiled in a publication and shared with decision-makers at global gatherings, including the Africa Adaptation Summit on September 5 and the COP27 in Sharm El-Sheikh.